There are only a handful of horror movie heroine/survivors that have made it past a couple of movies with their wits and body parts intact. The short list includes Jamie Lee Curtis who starred as Laurie Strode in four of the HALLOWEEN films, Sigourney Weaver as Ripley in four ALIEN films and now tying their record is Neve Campbell returning for SCREAM 4 (aka SCRE4M) as heroine Sidney Prescott.

Sidney has outlasted and outwitted the elusive Ghost Face killer (and killers) in the previous three movies and in this fourth installment she returns to her hometown of Woodsboro for a book tour only to find that slayings have commenced once again – and hacking away at a whole new round of high school students expertly educated in the cliches and tropes of the horror genre. 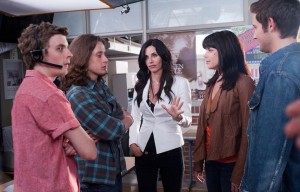 Campbell takes five to talk about her return which reunites her with former co-stars Courteney Cox and David Arquette as well as director Wes Craven and screenwriter Kevin Williamson.

On watching the old movies before shooting the new one  …

“I had fun watching the films again before we started this to get a sense of it,” says Campbell. “They held up well.”

On working on the SCREAM films  …

On having fun with her co-stars …

“We were having fun during filming,” says Campbell. “You’re not feeling it’s a dark experience. There’s humor in them. Part of the fun of the [SCREAM movies] is that they are self referential and make fun of [horror movies].”

On working with the younger cast on the film …

“It’s great,” says Campbell. “Courteney and I looked at them and said, ‘we could be their mothers’ [laughs]. They were great. They came with so much enthusiasm and people asked if we had to show them the ropes, but they’re professionals in their own rights. They had careers at young ages and they came in and did a great job.”

On the definition of celebrity which SCRE4M explores …

“It’s shifted with reality TV,” she says. “It’s much easier for people to become famous and not for a whole lot of anything. The mentality has definitely changed. It’s a bit sad. It is what it is and people love reality television. We love gossip magazines. [American] doesn’t have a Royal family so we look for other things to look up in other ways. It’s definitely switched.”