Exclusive Interview: Jon Cassar talks about THE KENNEDYS mini-series being canceled by the History Channel 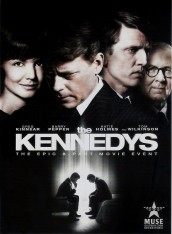 Exclusive Interview: Jon Cassar talks about THE KENNEDYS mini-series being canceled by the History Channel

He’s also hopeful the eight-part mini-series will find a U.S. home in the coming weeks

It was a big shock earlier this week when The History Channel announced they were canceling the already filmed and completed eight-part mini-series THE KENNEDYS following the lives of that important First Family. Starring Greg Kinnear as John F. Kennedy and Katie Holmes as Jackie Kennedy, it was an ambitious project hatched by former 24 co-creator Joel Surnow.

While at TCA’s, ASSIGNMENT X caught up with THE KENNEDYS director Jon Cassar (also another former 24 alum) to ask him about his thoughts on the cancellation and where the mini-series goes from here to secure a U.S. network.

ASSIGNMENT X: Can you talk a little bit about the cancellation?

JON CASSAR: I know about as much as everyone else. The History Channel has decided not to air the show. They were big supporters of the show right from the beginning and supported us all the way through. They believed in the show and I still think they believe in the show, but decided it wasn’t a good fit at the end of the day.

AX: When did you get a hint they were going to pull it?

CASSAR: Absolutely no hint at all. It was a surprise to everyone.

AX: It’s bizarre though to spend all this money, get approved scripts, have a great looking show …

CASSAR: … with wonderful performances by my cast …

AX: … so do you think it’s pressure from other sources?

CASSAR: I don’t have to guess it, there was pressure from above from the Kennedy family and that’s what [the History Channel] based their final decision on.

AX: That’s a lot of money down the toilet.

CASSAR: Right now, we’re still looking for someone to air the show and we feel confident someone will air the show. It’s too good to let it go. History Channel will recoup their money if they can sell it. It’s the chance they’re taking, mind you, but that’s what’s going on.

AX: Why is it when it comes to political mini-series like this and THE REAGANS, that networks tend to get a little skittish after the fact?

CASSAR: Any time you’re dealing with a real story, you get this. You have to have lawyers who vet the scripts, which we had on the History Channel. Probably the vetting process for historical accuracy was more intense than I’ve ever seen before. We were very, very conscious of being as historically accurate as possible. We bent over backwards to take all the notes, change everything we had to make it historically accurate. That’s always part of this process. Any time you’re dealing with a real story, it’s going to have that kind of affect on people who feel that story should be told a certain way. That’s what I feel happened.

AX: Was the mini-series straight forward?

CASSAR: It’s pretty straight forward. There’s more controversy being created by the fact that they pulled it off the air than is actually in the show.

AX: So it wasn’t political in a polarizing way, it was political based in history?

CASSAR: It was political based in history. It truly was.

AX: So it wasn’t like – “Kennedy liked to wear leather!”

CASSAR: No, nothing like that. There have been thousands of books written on the Kennedys. That’s a lot of books and they dealt with every part of the Kennedy family and our stories came from that. Our actors were so proud to be playing these people and played them with such accuracy and did so much research on their characters – they wouldn’t let us get away with anything that wasn’t real. My actors came to set on every scene we did with books in their arms, and pulling out chapters and pointing to things saying, “this is like the script says. This is exactly what he did.” There was this huge check of history constantly by the writers in the first place, the History Channel and their lawyers in the second place and on the floor between myself and my research and the actors and their research. We made it as accurate as we could make it and as accurate as the facts out there allowed it to be.

AX: Were you nervous it would get pulled when you were making it?

CASSAR: No, never. The History Channel was 100 percent behind us. They had concerns, which we all addressed, but we never thought anything like this would happen. Why would you?

AX: What network would make a great fit for the show?

CASSAR: It’s really hard to say. First of all, the History Channel were trying something new by doing scripted programming. That didn’t seem like a good fit at the time. We got used to the idea that what a wonderful thing the History Channel would be doing that they would start creating these programs that dealt with history and that made a lot of sense to a lot of people. We were all very excited we were breaking new ground for a network to do something for the first time and all of us being part of that pioneering project.

AX: Does it look pretty solid that it will get a U.S. pick-up?

CASSAR: We’re hoping within a few weeks that we’ll have viewership in America. You have to remember too, we have viewership around the world. There are over 40 countries that are going to play THE KENNEDYS whether it plays in America or not. We still have the foreign deals all set and the Canadian deal, which is right across the border, is set also.

AX: Is there a slight chance it could not get picked up by the U.S.?

CASSAR: I suppose. There is no way of knowing now. There is always a chance of everything. It’s a possibility, but I think part of our confidence is we just know the show and how good it is. At the end of the day, somebody is going to look at it and realize how good it is and say, “we’ve got to have it” and that’s what we’re hoping.