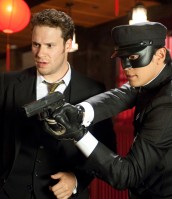 Yet, on Friday, Rogen will make his superhero debut with THE GREEN HORNET, playing the iconic green-masked hero from the old radio serials who is given a modern-day facelift with comedy and crazy action.

Think of it as SUPERBAD meets superheroes as Rogen plays Brit Reid, a wayward playboy and heir to his father’s newspaper empire. Realizing he wants to do something with his life, he decides to become a crimefighter, by posing as a criminal and using the newspaper to tell his dastardly tales. His sidekick is Kato (Jay Chou), who is much more superhero than Brit and the two of them comprise an unlikely dynamic duo who run amok through Los Angeles – while also partaking in some hilarious buddy comedy along the way.

Talking to the press this weekend, Rogen takes five to explain what makes THE GREEN HORNET (which is directed by arthouse auteur Michel Gondrey) different from all the other superhero movies out there. 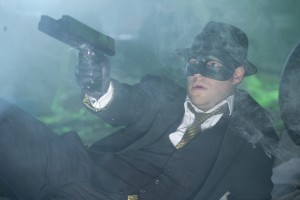 TAKE 1:
On developing the script with writing partner Evan Goldberg …
“In the beginning phases of writing the script we did a ton of research and accumulated a tons of ideas of what we would like to include in this movie,” says Rogen. “We tried to listen to almost all the radio serials, but they’re a little outdated I guess. Back then, just hearing footsteps for thirty seconds straight was really suspenseful and interesting. The creaking of the door opening was real cinema. It would be real hard to sit through two hours of that, for me. We went back to the radio show, the serial and the TV show and tried to include ideas from all these things. The Zephyr’s in there and little tips of the hat to the previous incarnations of it.”

TAKE 2
On making this an unconventional superhero movie that doesn’t adhere religiously to the source material …
“I have no real interest in doing a very literal interpretation of a pre-existing material,” he admits. “I see a lot of these comic book movies that come out now, you feel like anyone could pick up the first few editions of the comic book and take it to a D.P. and say ‘I want to shoot this’ and six months later, you have the origin stories of most super heroes. That didn’t interest us in any way. We wanted to be able to inject our own sensibilities into it and our own sense of humor and the things we love about super heroes and comic books ourselves. There were a few benchmark iconic things that people knew about THE GREEN HORNET: Kato. The car. The gas gun. The song. Lenore. The D.A. That stuff we knew we wanted to include, but it was fun because we could integrate them into the story however we wanted. We introduced them in a way that was organic to our characters and not previous versions.” 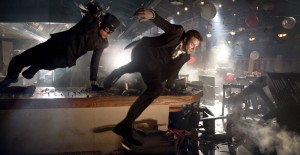 TAKE 3
On Brit Reid being self-aware of superhero conventions …
“We thought ‘Who is the kind of guy who would likely become a super hero?’” explains Rogen. “It would probably be somebody who reads comic books or is a comic book fan. In the writing, we wanted to subvert notions that are in a lot of these comic book movies and you would find in a lot of early origin stories of comic book characters. In order to play with those ideas, you have to be very aware of what they are in the first place and that they exist to some degree. To us, we wanted to kind of dance on the line of the comic book movie.”

TAKE 4
On making this movie a little more violent than most superhero films …
“I always thought it was funny on the A-TEAM [TV series] where they would shoot 400 people and none of them would die,” says Rogen. “If you’re going to make a violent action movie, you might as well go for it. It’s all from the point of fun and in action than anything.  What we were fascinated by is how many people die like in TRANSFORMERS. Optimus Prime being thrown through one building kills 4000 people, yet there’s no mention of it at all. No one says anything.” 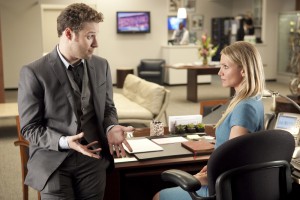