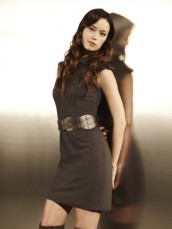 The actress talks her new series plus DOLLHOUSE, CHUCK and having something in common with her characters 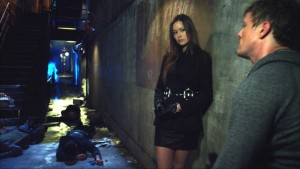 On NBC’s new series THE CAPE, hero Vince Faraday (David Lyons) can do amazing things with the title object, but he’d still be unlikely to survive without the guidance and assistance of Summer Glau’s Orwell, a mysterious young woman whose martial arts abilities are as impressive as her considerable computer skills.

Glau is no stranger to the world of genre television and film. After playing the trapped spirit of a Russian ballerina in an episode of ANGEL, she was cast as the troubled, but super-powered River Tam on Joss Whedon’s FIREFLY, a role she reprised in the feature SERENITY. Glau furthered her genre street cred by starring as helpful-to-humans Terminator Cameron in two seasons of TERMINATOR: THE SARAH CONNOR CHRONICLES and as techno-whiz Bennett Halverson in an arc on DOLLHOUSE.

She’s one of the stars in the upcoming feature KNIGHTS OF BADASSDOM, but during this conversation, she makes it very clear that she’s delighted to be woven into the cast of THE CAPE.

ASSIGNMENT X: Were you looking to do another television series when TERMINATOR: THE SARAH CONNOR CHRONICLES ended?

SUMMER GLAU: Absolutely. When everybody was asking me, “So what do you want to do next?”, the thing that I was asking for was to be part of an ensemble cast where I would really be surrounded by actors who pushed me to be better. And that’s what I got. Sometimes when you put it out there, it comes true. And it’s cool, because I didn’t even know about the show until the end of pilot season and it was the last show I auditioned for, and it just came together seamlessly and when I came to the first table read and I saw the actors that I was going to be working with, I was extremely intimidated [laughs], also thrilled and very excited. 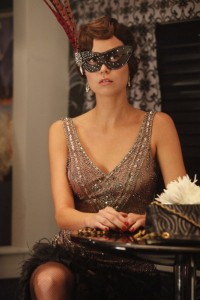 AX: CAPE series creator Tom Wheeler has said since they cast you, Orwell has become a little more kick-ass than she was originally intended to be.

GLAU: [laughs] That’s nice to hear. In the pilot, she does start out true to herself as an investigative blogger. Tom said, “We’ve got to get her out of her lair,” and sure enough, in the next episode, she’s going out on the field, constantly [helping the Cape] and being in disguise and taking charge of the situation by any means she can.

AX: Orwell seems a little self-effacing as a character. You’re better-known characters seem to have that in common to some extent – River in FIREFLY and SERENITY felt very isolated and tentative with others, Cameron in SARAH CONNOR knew she didn’t have normal human feelings, Bennett in DOLLHOUSE was socially isolated. Are you at some point looking to play somebody who’s a little more, “Oh, I’m happy with who I am”?

GLAU: You know, I don’t know if I’d be the best person for that. I feel like you always kind of put yourself in every character that you play. With Orwell, I did have a challenge, because she’s very slick and she’s very sophisticated. It did take me a little bit [of time], because I don’t really see myself as slick or sophisticated, so she has that quality, but then there’s also a little bit of me in there.

GLAU: I would say that Orwell is very different from anything that I’ve played so far. I have to work on my technical [manner], because I am terrible – I can’t type very well and I don’t know anything about the latest gadgets [laughs], so Orwell is definitely teaching me to be more savvy with my technology.

AX: Had DOLLHOUSE not been canceled, do you know if Bennett might have survived to be a continuing character?

GLAU: The show was already canceled by the time I went on it. [Working on DOLLHOUSE] was really fun – it was really strange coming in to play her with them knowing it was going to end. I had a blast with that role. 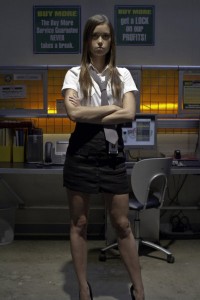 AX: Earlier this season, you did a one-shot guest role on CHUCK. Did you do CHUCK because of your FIREFLY/SERENITY connection with Adam Baldwin, or because you were already involved in THE CAPE and that was another NBC series, or did CHUCK just come to you and go, “You’re a genre icon and can we have you?”

GLAU: I don’t know how that happened. I was tickled. I was very excited – I’m a fan of the show and I’m a fan of Zach [Levi, who stars as Chuck] and of course it was great seeing Adam and I did it right before I started on this, so it was kind of a whirlwind experience. I had a blast, because I had never done comedy before [with] me playing a character. When I did BIG BANG THEORY, it was comedy, but I was playing myself, so playing Greta was a blast.

AX: Do you have input into the development of Orwell as a character?

GLAU: I think that all of us, each actor, can’t help but infuse their own qualities and ideas into their characters. It happens with every series, and that’s one of the really rewarding things about being part of a series, is that you start out with something and as you go along, it evolves with you. I’m just incredibly glad [to be on THE CAPE]. I think that this show’s going to appeal to every member of the family. I’m exactly where I want to be right now.

CLICK HERE for exclusive interviews and episode reviews of CHUCK