Home » Breaking News: Season 2 of HUMAN TARGET will not end on a cliffhanger 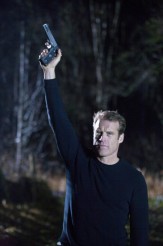 HUMAN TARGET (which airs a special episode tonight at 8:00 pm at Fox) is gearing up for the season two finale in a couple of weeks (in its regular time slot on Wednesday nights), and Mark Valley spoke today about what to expect.

The most important nugget of information – there won’t be a major cliffhanger ending Season Two.

“It won’t be a cliffhanger in terms of last season was,” says Valley. “It does sort of complete the second season, while leaving a lot of uncertainties and relationships. Nobody is in physical peril as much, we don’t know where some of [the relationships are going], but it also feels like this is a team that’s going to stick together and make it work.”

Even though the series has not been given an official Season Three pick-up, Valley commends new showrunner Matt Miller for setting up the pieces of the puzzle for the show’s hopeful longer run.

“I think Matt has done a great job establishing who these characters are and where they’re going,” says Valley. “It will be interesting to see what his ideas are for Season Three.”

As for the last handful of episodes, Valley says, “We end strong. We do see a little more of the relationship building between the two new members of the cast [Indira Varma, Janet Montgomery]. Aside from that, the episodes continue to surprise and where we’re going with the stories is generally unpredictable as well.”