Breaking News: David Lyons gives the scoop on THE CAPE

Where is the rest of Season 1 heading? He has the answers

NBC’s new superhero drama THE CAPE (airing Monday nights) features David Lyons as Vince Faraday as cop who is framed for a crime he didn’t commit, fakes his own death and ends up hooking up with a bunch of circus performers who teach him to become a superhero known as “The Cape.”

Now he must clean up the city, while trying to get back to his wife and young child (whose favorite comic book character is called The Cape) who believe that he’s dead.

While speaking today with the press, Lyons spoke about his challenging new role and where the series will be heading in the coming weeks.

On the physical demands of the show …
“It’s been incredibly, physically, demanding – more so than any other role that I’ve ever taken,” says Lyons. “Prior to starting the pilot, I was training with a fight choreography crew called 8711 that work in mixed martial arts. So every spare moment I had, I was working the bags … and just trying to get the basic choreography and a fight style down for Vince Faraday. Every fighter has their own technique, and he’s got a particular one, which kind of comes from a military background, so we’re kind of focusing on close-quarter combat and things like that..” 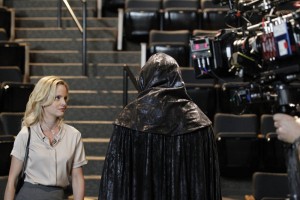 On what to expect from the show in the coming weeks …
“We don’t have a dull episode and that’s something that we’re very proud of,” he reveals. “This week, obviously, [we have] Mena Suvari [as a guest star]. Next week, we have two hired assassins called Goggles and Hicks who are great, great character studies. Coming up, we also have Elliot Gould coming in playing a very hefty role. There’s another character called the Lich, which is one that I’m looking forward to seeing the response to, which is a character that Orwell gets involved with.”

On whether Vince believes he is a “real” superhero …
“[To him], it’s all about creating the image of a superhero, but at the very heart, beneath the cape and beneath the breastplate, it’s a guy that’s just desperate to do what he needs to do,” says Lyons. “So he’s kind of putting on a persona. It’s not something that comes naturally to him.

On his own favorite superhero …
“As a kid, I don’t specifically remember having a superhero that I was attached to,” admits Lyons. “Obviously Christopher Reeve’s Superman, was something that was in the forefront of my mind, and also STAR WARS and Han Solo and those sort of guys, but in terms of approaching this, I didn’t really view the character, Vince Faraday, as a superhero. He was more the everyman that’s caught in an environment that is so extreme that he has to go to an extreme lengths in order to reclaim what it is that he’s lost.”

On whether Vince will ever be reunited with his family …
“In this situation, what we’re seeing with the journey of Vince Faraday – it’s one man who’s fighting to get his family back and to clear his name and in doing so realizing the importance that his role is in an environment that is becoming increasingly more corrupt,” says Lyons. “So there is that pull towards family, and then there is this other pull, which is dragging him from society away from his family. And I can tell you that he does come into communication with his family on certain levels, but I can’t give too much away. We will see the cracks in his obsession to appear and trying to figure out how to juggle these two things – these two burning wants.”