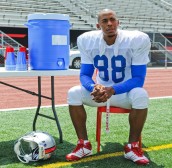 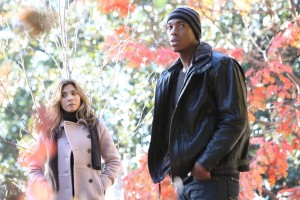 NECESSARY ROUGHNESS represents some job security for the Texas-born Brooks, who played the ill-fated Eggs on Season Two of HBO’s TRUE BLOOD. He then portrayed a lawyer in ABC’s THE DEEP END, which ran for thirteen episodes, and then played both the teen version and the adult version of a high school jock turned U.S. soldier in Afghanistan in MY GENERATION, which was on the air for only a few episodes.

NECESSARY ROUGHNESS has already been renewed for a second season, and it sounds like Brooks is having a wonderful time there – when he’s not working on his documentary MYSTIC SEEKERS.

ASSIGNMENT X: Is T.K. patterned after anybody from either real life or the Jamie Foxx character in ANY GIVEN SUNDAY?

MEHCAD BROOKS: No. That’s actually the second time I’ve gotten that question. There are a lot of similarities, but I think the similarity lies in the real world and the fact that you can really take any football star, from any decade and put him in this same kind of [situation]. Some of these guys are probably clinical narcissists. They eat it up because of this love that they receive when they’re scoring in the end zone or when they’re superstars, but they’re not really seeking [love and support] in the right place in their personal lives.

So I based part of this character on my biological father; who was a professional football player, I based part of the character on some guys I know; I based it on a multitude of wide receivers who had personalities and I think egos bigger than their talent, at least their perceived talent in the media. And I steal from actors all the time. I steal from Denzel [Washington], I steal from Jack Nicholson, I steal from Warren Beatty – I steal form people I respect. I steal from Jamie Foxx in general. Not verbatim, but just certain things – because he’s from Texas as well, a lot of the things that he does comedically are the things that I naturally do comedically, too.

AX:  T.K. has a lot of different aspects that can show up within one episode, where he can go from being very belligerent to laid-back, to very serious and introspective. Is that kind of variety what you look for as a role?

BROOKS: Most definitely. I used to play basketball. And I got a bunch of basketball scholarships. The reason I quit was because I wasn’t going to work hard enough to be the best, because I didn’t love it enough. And when I found out that I loved acting like that, I got into it wanting to be Will Smith. My mother’s a journalist, and I know how tenacious she was. She’s been nominated for a few Pulitzers, I’m very proud of her. If I can be half the person that she is, I will be astounded with myself. She instilled that in me. She said, “Look, don’t want to be something, just do it. Do not take no for an answer. If you want to be something, if that is your reality, just do that.” So everywhere that I go, I want it to challenge me. I want to [feel], “I don’t know if I can pull this off” when I see the script. And I take the time and I take the effort to make sure that I can.

I’m lucky that T.K. runs the gamut of emotions and he has this incredible arc, not just in every episode, but throughout the lifespan of this character. You can be proud of him, some moments you’re going to be embarrassed for him, and some moments that you’re just going to be entertained by and surprised by. And sometimes I’m surprised myself by the situations he’s in and how I react.

AX: You’re known for doing a lot of very serious characters, but there’s a lot of comedy with T.K. Were you looking for a lighter role?

BROOKS: Funnily enough, if you saw my resume, people would not think this, but this is the most comfortable place where I sit as a person – I’m very comfortable in comedy. I was the class clown growing up, but I was also the class president. So I knew how to not piss the teachers off too much, and where respect ended and disrespect started, and so I was able to push the envelope to the point of where I knew I could make the teachers laugh. And if I made my teachers laugh, I could make my parents laugh, and so on and so forth. I used to go home every single day after school and watch Eddie Murphy in DELIRIOUS, which was before my parents got home, because they would never allow that, and by the time I was twelve, I could probably recite it to you, every foul word. I could probably recite it now, but just making people laugh and not taking myself seriously, that’s where I live. That’s my zip code. 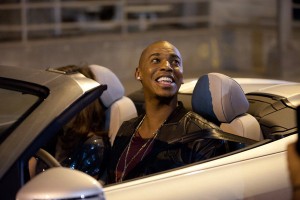 AX: T.K. is not Dani’s primary patient in most episodes …

BROOKS: Yes, which is great, because if it was just like IN TREATMENT situations, it would probably just get dark. [When series creators] Liz Kruger and Craig Shapiro told me that he becomes a surrogate member of [Dani’s] family, I just thought that was hilarious, that this professional football player who’s got more money than God and an ego bigger than God [laughs] happens to become a surrogate member of this large Long Island Italian family. I just could imagine the clashes. I hadn’t read anything beyond the pilot, but I was like, “I’ve got to do this. This is great.”

AX: Did you have any opinions about psychotherapy before getting this part?

BROOKS: We all have situations in life that I think we need help with and I’ve been through a couple really difficult things in my life that I [dealt with] myself, and that’s the hard way. I wouldn’t say it’s the wrong way, but I would say that would be the way that takes a lot longer than it has to. And maybe you gain some more scars because of it. I had a pretty bad experience in Atlanta recently where I got hit by a car head-on. To clarify, I was at a red light [in a vehicle] and a car came off the highway and hit me at sixty-two miles an hour. It wasn’t the most traumatic thing I’d ever been through, but it was up there, and I reached out to Dr. Donna Dannenfelser, who is the actual person that Dani Santino is based on. [Dannenfelser] is also a supervising producer on the show. And she’s now my therapist.

So I’m kind of like the kid doing the homework in class and I believe heavily in therapy now. Even if it’s just to vent to someone whose job it is to listen to you and hear you out and then ask you questions about what you’re saying – “Is this what you really mean?” I think it’s very healthy.

AX: Is it also helpful for you as an actor?

BROOKS: I think it’s helpful as an actor in breaking down a character, coming at that character on a psychological level as well as on an emotional level. How did they get here? What would they do in every situation? If you know their mind and you know their imagination and you know their experiences, that adds up to knowing what they would do in the future, knowing what they would do in any situation. If the director throws a curve ball at you or an actor does something unexpected, you can respond accordingly within the realm of the personality of that character. So yes, it’s very helpful.

AX: You’ve been through the swamps of Louisiana, the deserts of Afghanistan and the air-conditioned courtrooms of New York. Where does NECESSARY ROUGHNESS fit in terms of your physical comfort?

BROOKS:  I enjoy it when it’s indoors. Atlanta [where NECESSARY ROUGHNESS shoots] is really, really, really hot. I’ve been in Africa and India, and it’s not as hot [in those places]. [In Atlanta], we’re talking a hundred and ten heat index. I mean, it’s maybe ninety-nine, but plus the humidity, it feels a hundred and ten. And wearing fall clothing – because we’re shooting for New York in the fall – so that is rough.

AX: You played a high school athlete turned soldier in MY GENERATION. How do you play a teenager?

BROOKS: Very carefully. [laughs] Open your eyes a little wider, which actually does make you look younger, facially. You express yourself louder [raises his voice], “Like this! How ya doin’?” And then you’re obnoxious. I was a jock in high school, so I just – the ways that you calm down as an adult, you just reverse that. You go, “Oh, I was really obnoxious as a kid.”

AX: You expressed a lot of feelings of responsibility about playing the military aspect of the MY GENERATION character, when he became a soldier …

AX: Do you miss TRUE BLOOD at all?

BROOKS: I felt like I had a good run on TRUE BLOOD, it was a lot of fun, it was an incredible therapeutic experience – you’re able to let your inner animal out, your monster out, and I really enjoyed that. It was really healthy for me, especially. I still talk to Ryan Kwanten a lot, I still talk to Nelsan Ellis. It’s a great show. I’m really happy for them. I wish them all the success in the world.

BROOKS: I’m kind of ashamed to admit I don’t watch a lot of TV, but when I do, it’s mostly just NSNBC.

I’m starstruck by Rachel Maddow. You can quote me on that. She’s amazing. I love her. I watch REAL TIME with Bill Maher, I’m very politically motivated, and I kind of just spend my time doing that. And I read a lot.

AX: Do either the politics you watch or the therapeutic material you’re dealing with on NECESSARY ROUGHNESS have any bearing on MYSTIC SEEKERS, the documentary series you’re doing on spirituality?

BROOKS: Definitely. I think it’s all housed in one place – the emotions, the spirituality – they’re all neighbors, if not family, and I think if one is out of whack, it’s going to make the others [off]. If your emotional state is great, it’s easier to meditate, it’s easier to cleanse your mind, it’s easier to manifest things. If that’s in good order, it’s easier just to not take things and let them knock you off your game and be anxious about it. So they’re all connected, very much so.

AX: Is this an examination of comparative spirituality of different parts of the world?

BROOKS: MYSTIC SEEKERS? Yes. Next we’re going to go to the Yucatan Peninsula, a little bit south of that, and check out the Mayan situation, see what’s going on there for real, and we’ve got some ties to the Maori tribes in New Zealand and we’re going to check out Buddhism in Tibet. We also have a Greek Orthodox Christian guy who agreed to go on camera. He lives in a cave and we got him. So it takes like two weeks to get a message [laughs], but it’s great. This is stuff people have never seen. I got to walk on hot coals, we brought the camera into Hindu temples that have never even let Westerners in. So it’s pretty amazing.

AX: What is your role in the production of the documentary series?

BROOKS: I’m producing and co-hosting. We’re doing it independently. Actually, we have a very nice budget, which is good. We’re very blessed. We are pitching it to networks soon. We started with Hindus – we’re going around the world and doing a bunch of different ones.

AX: Is there anything else you’d like to say about either NECESSARY ROUGHNESS or any other projects?