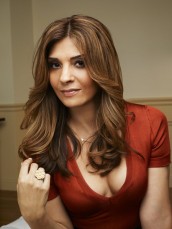 A smart, entertaining intersection of sports and psychotherapy 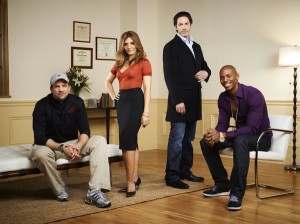 USA’s new series NECESSARY ROUGHNESS (which has nothing, outside of football, in common with the 1991 feature of the same name starring Scott Bakula) fits in with the network’s lineup of quirky professionals taking quirky jobs. Indeed, the show has a modestly original premise – certainly no one is going to come away grumbling, “Oh, not another dramedy about a therapist treating professional sports figures!” Based on the pilot episode, NECESSARY ROUGHNESS is in fact reasonably entertaining, if just a little predictable.

Psychotherapist Dr. Danielle “Dani” Santino (Callie Thorne) finds out that her husband is cheating – with a whole bunch of different women – and throws the jerk out, only to have him contest custody of their two teenaged children (Patrick Johnson, Hannah Marks).

Out for a relaxing evening with a friend, Dani hooks up with friendly professional football trainer Matthew Donnally (Marc Blucas). He fixes her pinched nerve, one thing leads to another, they spend the night together and in the morning, Dani demonstrates her own professional prowess by giving Matthew a hypnotherapy session that cures his smoking habit. A week later, Matthew’s impressed boss calls Dani in to see if she will work with problematic Hawks quarterback Terrence “T.K.” King (Mehcad Brooks). Whether Terrence will let Dani help him, especially while Dani is in the midst of her own domestic chaos, is the big question of the episode.

NECESSARY ROUGHNESS pairs up well with ROYAL PAINS, the USA series that airs in the timeslot immediately preceding it. Both shows deal with smart, reasonable health professionals working with crazily rich clients. In ROYAL PAINS, the doctor is an MD, whereas in NECESSARY ROUGHNESS, she’s a PhD, but the dynamic is the same. Dani is serious about wanting to help T.K. get out of his own way and not at all self-righteous about to how the team’s money can cut through all sorts of knots. There’s some fun and a sense of potential with the Hawks’ shady but efficient fixer (Scott Cohen), who heads off some of Dani’s divorce issues handily in the name of maintaining her availability for T.K.

The depiction of psychotherapy is a little pat but still in the professional ballpark, which is more than can be said of how it’s portrayed on many other TV shows – Dani and Matthew actually acknowledge they can’t date so long as she is treating his players, which is a refreshing infusion of real-world therapeutic ethics. As for the climactic football game, we know how it has to go, but it’s still a lot of fun to watch.

Dani’s domestic issues, particularly with her rebellious teen daughter (Hannah Marks) round out the character’s universe. At the same time, these sequences are neither as original nor as entertaining as the rest of the show.

Thorne is a pleasure as a smart, sexy, proficient adult who is nevertheless capable of losing it temporarily when she is overwhelmed. The actress not only makes the character someone we’d like to know, she makes us feel like Dani is someone we may know already. Blucas (Riley on BUFFY THE VAMPIRE SLAYER way back when) is thoroughly charming as Matthew and Brooks (lately of TRUE BLOOD) makes T.K. a very sharp man whose sensitive side remains congruent with the armor-plated exterior he presents to the world at large.

The end of the pilot leaves T.K. in ongoing therapy with Dani, while opening the door for her to treat other sports-world figures. Going by this episode, these sessions seem like they’ll make for enjoyable viewing.