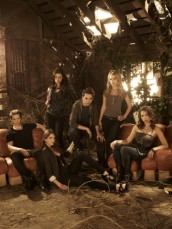 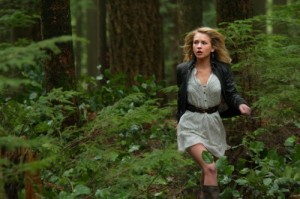 The CW has a new series based on a series of books by novelist L.J. Smith and produced/show-run by Kevin Williamson, about secret supernatural goings-on in a small town. No, it’s not THE VAMPIRE DIARIES (which has all of those attributes, except newness, as it’s going into Season Three) – it’s THE SECRET CIRCLE. Brittany Robertson plays Cassie Blake, a young woman who is forced by tragedy to move back to her family’s home town, where she discovers that she and many of her new neighbors are witches, able to tap into innate magical powers. Thomas Dekker (TERMINATOR: THE SARAH CONNOR CHRONICLES) plays a friendly male magic practitioner, and Gale Harold (QUEER AS FOLK) plays a malevolent mage.

Williamson, who has also written and produced DAWSON’S CREEK and the SCREAM film franchise, takes the time at a network party to talk about his walk into the world of witchcraft.

ASSIGNMENT X: Does THE SECRET CIRCLE take place in the same universe as VAMPIRE DIARIES?

KEVIN WILLIAMSON: No, actually, it’s not. That’s the important distinction. It’s from a book series written by L.J. Smith, but it’s not in the same universe at all. It’s its own separate world. But the witches in VAMPIRE DIARIES are not the witches in SECRET CIRCLE. It’s all a brand-new mythology, a brand-new show. For instance, there are no vampires and werewolves in SECRET CIRCLE. They don’t exist.

AX: Are there demons in SECRET CIRCLE?

WILLIAMSON: Possibly. There are other things. I’m not really giving anything away. If you read the book series or are familiar with the books, it’s all in the book series. We’re just sort of picking and pulling from it and putting everything together as best we can.

AX: Are there both female and male witches in SECRET CIRCLE?

WILLIAMSON: Well, in our current circle, we have four witches, two [of whom are] guys. There are certainly a lot of guys in the show.

AX: In the SECRET CIRCLE universe, how does one become a witch?

AX: When you say, “witches and mortals,” do you mean the witches are immortal, or just that the mortals are regular people, as opposed to people with magical powers?

WILLIAMSON: They’re “regular.” [The witches] have power, and there’s a mythology to it, but for the most part, they have a [normal human] lifespan.

AX: Is SECRET CIRCLE going to be as arced as VAMPIRE DIARIES, in that there’s going to be a big pile-driving main plot, with all of these little subplots spinning off it?

WILLIAMSON: Yeah. I mean, that’s kind of the nature of this world of it. It’s a companion piece, so I don’t want to like say, “Yeah, one hundred percent [like VAMPIRE DIARIES].” It has a bigger mythology to it – there’s sort of a driving force to the first season, but it’s a bunch of different little plots. The fun about this show is that I think it will be an easier show to watch in terms of following it. You can pick up the plot [coming in to a later episode]. But yeah, there’s a serialized nature to the show. It’s a rollercoaster. 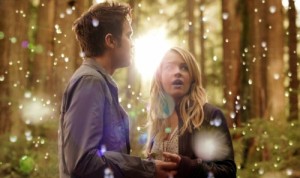 AX: Is there anything you can do on SECRET CIRCLE that you can’t do on VAMPIRE DIARIES?

WILLIAMSON: Well, there are all of these new characters in the show. For me, I think it’s a wonderful opportunity just to have more character storylines. I believe it’s a little richer set-up that can lend itself more to relationship drama.

AX: Are any of the actors on SECRET CIRCLE people you considered but didn’t use for VAMPIRE DIARIES, or in fact did use in smaller roles and said, “Gee, I really like you, let me bring you back in this other show?”

WILLIAMSON: Well, we haven’t really cross-cast anyone yet. I mean, there was talk of it. Actually, a lot of the cast members came about because [they were] people that I’ve always wanted to work with, like Natasha Henstridge. I’ve been a big fan of hers. I found her work in ELI STONE so impressive. I loved her so much and I just have adored her and I just am so happy that we got her to come in. And then Gale Harold I’ve been a big fan of, and Gale Harold I always thought played a really good bad guy. In the last few years, he’s been stuck playing the hero, a good guy, and I went, “This is how I want to see Gale Harold. I want to see him play the evil.” And so I’m happy to have him as the bad guy.

AX: You did DAWSON’S CREEK for the WB, which has now morphed into the CW. Do you feel like it’s essentially the same network now, or a different one?

WILLIAMSON: It was the WB and UPN [the two networks merged into the CW], and I feel like the CW is a brand-new network. It seems to me that, yeah, they do sort of have that female-driven demo [that the WB had previously], but it feels like now more than ever, we’ll see with this current [network regime], with [CW president] Mark [Pedowitz]. [Previous CW president] Dawn [Ostroff] in the last few years was really trying to change it up. If you look at the pilots she was picking up, she was picking up some procedurals, she was picking up some adult-driven stuff. She wasn’t just going after the GOSSIP GIRL demo. She rightfully saw that we’ve got to move, we’ve got to keep moving. And I’m glad. I think Mark is clearly onto that line of attack, which is, “We are glad VAMPIRE DIARIES is working. Let’s see if SECRET CIRCLE – I came in, here it was, I’ll go with it, we’ll see what happens.” And I’m sure there was an agenda about seeing what will happen next [with the network], because I think it’s all about keeping it moving and keeping the ideas flowing. I do think personally the serialized shows have been a challenge to get new viewers, so we really do try to open a show every episode, and I personally enjoy them, I love them, I think they’re great for the network. I think they survive on a small audience, but they [wouldn’t] survive as big network shows. The shows that thrive on the big networks are procedurals or your hybrid shows that have a franchise. I love Mark, I’ve known Mark for a long time, so I’m very excited. He’s like Peter Roth. Peter Roth breathes and watches everything. I don’t know when he sleeps.

AX: Anything you can tease about Season Three of VAMPIRE DIARIES?

WILLIAMSON: I don’t want to give anything away, other than to say it’s going to be a really great year. It could be the best. It’s a wonderful year.

WILLIAMSON: No, it’s not my idea. It’s this young thing of [the image makers] wanting to play the hair up. I walk behind them and go like this [moves hands in a gesture of handling someone else’s hair]. I had nothing to do with that. That is completely accidental and now that you’ve said it, I’m going to go comb their hair [laughs].