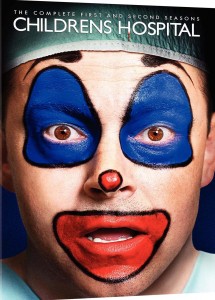 Marino is also known to TV viewers as private detective Vinnie Van Lowe on VERONICA MARS, often stymied catering worker Ron Donald on PARTY DOWN, and Tony, single gay demon adoptive father of a human baby, on REAPER. The Long Island native is also a prolific screenwriter of comedy films. He talks with us about all of these gigs and more.

ASSIGNMENT X: Do you have a background in improvisational comedy?

KEN MARINO: Actually, no. I’m from a sketch comedy background. I was in a sketch comedy group called the State, and a lot of people think it was an improv group, but we actually prided ourselves on doing scripted stuff. We did improvise within the material, but we were sketch people. So improv was a scary thing for awhile, but then I learned to love it.

MARINO: I would say that this is much more like sketch comedy, but we have the freedom to improvise and I do love doing it within the structure of a script. Two of my dear friends who were in the State, the sketch comedy group that I was in, did a show called RENO 911 for awhile, and that was really loose and improvised and that was always fun to do. So as I’ve gotten older, I’ve gotten more confident.

MARINO: Well, you improvise within the lines and the text. I try to stay in the light and in front of the camera, because I know that’s the only way they would be able to use it, so I try not to veer too far away from what the blocking is.

MARINO: He is a Jewish surgeon and he wears his yarmulke all the time.

AX: Can you compare the styles of comedy, both in the material and in how you perform it, between CHILDREN’S HOSPITAL and PARTY DOWN and REAPER and VERONICA MARS? I mean, because REAPER in a way was dramatic, but obviously, you were playing fairly out-there character, PARTY DOWN was a little more lifelike, CHILDREN’S HOSPITAL is farce …

MARINO: You get a sense of the material when you read it, what the tone of the show is. Sometimes you have to kind of figure it out when you’re on set, sometimes you don’t know exactly what the tone is, or the script might be a little misleading and they want to play against it or whatever, but I tend to try to play it dramatically, no matter what it is, because the text usually informs the humor of it. I’ll adjust it and heighten it if I need to, but like I think for me, my approach – the text in [CHILDREN’S HOSPITAL], for example, is super-absurd, and so I don’t feel I need to be absurd, I feel I can play against it – that’s funny to me. [Fellow CHILDREN’S HOSPITAL actor/writer] Rob Huebel was talking about that – it’s funnier to play it straight and then let the words be ridiculous.

MARINO: Yeah, sort of. It has that, “You don’t have to be a clown – be a dramatic actor and say the clown words” kind of thing.

AX: Do you have a preference for tone among the TV series you’ve done for several seasons?

MARINO: They’re all very special to me. You’re talking about REAPER, PARTY DOWN and CHILDREN’S HOSPITAL and VERONICA MARS, they’re all special shows to me. I’ve been very lucky to work on all of them. Do I have a preference of tone? I love each one for different reasons. I mean, CHILDREN’S HOSPITAL is super-absurd and I could be weeping, holding a dying doctor in one scene and then in the next scene I’m a Vietnam vet with a beard, coming in from my stint in Vietnam, and becoming a doctor and having those issues. You could really kind of do anything, and you get to do so many different things on the show, so that’s fun for this show.

PARTY DOWN – what I loved about PARTY DOWN was the humor and the heart of it, that it was such a dark show, but it had such a loving show at its core. I thought it was super-fun. And REAPER, I loved working on that show because I loved the main cast and the creators of that show and it had such a fun sense of humor about it and they gave me a fun part to play, so– it’s like babies. I love all my children for different reasons.

AX: Speaking of REAPER, how do you feel about how the series ended, both overall and for your character?

MARINO: I miss REAPER. I felt like I’ve been on several shows where [playing a character where the role grew much larger than originally intended] has happened, where I’ve been lucky enough to be part of it. I was on VERONICA MARS, where they kept bringing me back and I think they actually had plans to make my sleazy detective character become mayor of the town or something like that the next season, and the show got canceled. It was kind of a bummer. And then just also [it was sad to no longer be] working with those people. REAPER was the same way. I did a couple of episodes, and then they kept bringing me back on and it became a bigger and bigger part, or more significant in what the main storyline was, and so I was hoping that [had the show continued] I would get back to my lover and meet him in Heaven and I was hoping they would do it, because they were kind of heading towards that.

AX: Did you have any trepidation about working with a baby?

MARINO: Only when I was in my demon outfit, because they extended my fingers by like two-and-a-half, three inches and I didn’t want to hurt the baby, nor did I want to yell in front of the baby. Holding the baby in six-inch high heels that looked like horse hooves was also something that I was a little worried about, but we were very careful with the baby and made sure that the baby was safe.

AX: And did you wind up on PARTY DOWN partly as a result of having worked with Rob Thomas on VERONICA MARS, as he created both of those shows?

MARINO: Yes. I think what’s been nice is, throughout my career, I’ve [had] the luck and the blessing of working with really creative, funny people who seem to like what I do on some level, so I sometimes get asked back to do other things, and so that’s how it worked with PARTY DOWN. They were shooting this pilot just to kind of shoot it to shop it around, and I had worked with them on VERONICA MARS, so they thought that I would be a nice match for that, so it was great.

AX: Do all these shows have their own cult followings?

MARINO: I think so, yeah. It’s interesting, because [when] I came back from New Orleans, somebody came up to me about REAPER, and I haven’t heard that in a while. I’ve been hearing a lot about CHILDREN’S HOSPITAL lately, or PARTY DOWN seems to be a cult favorite. VERONICA MARS as well. So everybody has their favorite shows that they like, and the fact that I’ve had the luck of being on them and people remember me is such a nice thing. I’m very grateful and moved by it. It’s so nice when somebody comes up and says, “Hey, I like the work you did,” because I’m doing it because I love it and I think it’s funny and fun and there are so many jobs that you get that are just work and even the four shows that we’re talking about right now, they were all special in their own way, so when somebody comes up and says something nice, it’s a treat.

MARINO: Yes. David Wain and myself just wrote and produced and he’s directing and I’m in a movie for Universal, with Paul Rudd and Jennifer Aniston starring in it, and Malin [Akerman, who is also in CHILDREN’S HOSPITAL] is in it. It’s called WANDERLUST and it’s coming out in October. This will be my fourth [produced script]. I co-wrote ROLE MODELS with David Wain, and David directed it, and I had a small part in that, and then we did an independent movie called THE TEN, which was an omnibus movie with a bunch of vignettes, ten short stories loosely based on the Ten Commandments. It was ridiculous and sort of the vibe and tone of this type of show, super-absurd, super-dark, and then I did a more personal movie, it was my first movie out, called DIGGERS, about clam diggers on the South Shore of Long Island. Mark Cuban produced that and Paul Rudd’s in it and Sarah Paulson and Maura Tierney and Ron Eldard and Josh Hamilton and myself and Lauren Ambrose, who’s also in WANDERLUST.

AX: Do you have a preference between writing and acting, or do you want to keep doing both?