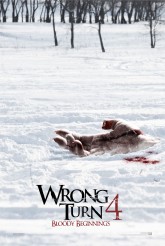 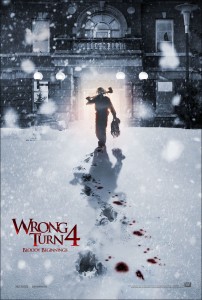 For a film franchise that got off to a less than stellar boxoffice start in 2003, WRONG TURN has proven to be one of 20th Century Fox’s steady DVD players and has resulted in two additional direct-to-DVD sequels over the years.

If you ever wondered how the cannibal crazies Three-Finger, Saw-Tooth and One-Eye got their appetite for death, destruction and flesh, then BLOODY BEGINNINGS hopes to shed some new bloody light on things.

Hitting DVD and Blu-ray this week, WRONG TURN 4 is set in a snowbound sanatorium where out trio of killers have been holed up for years. When a group of kids take a wrong turn, it will take a lot for them to get out alive.

In this exclusive interview with O’Brien, the director chats about his second WRONG TURN and how the winter setting brought a whole new look to the franchise.

ASSIGNMENT X: What did you want to do differently coming into WRONG TURN 4 than you did with WRONG TURN 3.

DECLAN O’BRIEN: This one they called me and said “hey, do you want to WRONG TURN 4,  maybe you bring Three-Finger back?’ and I was like “no, I killed him six ways to Sunday in the last one.” The parameter was we had to shoot it in winter in order to get the DVD release by October, so I had to think of something. I started thinking of all the scary movies set in winter – obviously THE SHINING is a huge influence, so I decided to find a setting with an old sanatorium, where these guys take a wrong turn and still living in the sanatorium are the cannibal hillbillies, which is where they grew up. It kind of takes you to the origin of how these guys came about. You see them as children. Cannibal kids are scarier than cannibal adults, which is scarier to me. We found this great facility in Brandon, Manitoba and shot it there in minus forty-five degree weather.

AX: You don’t see a lot of movies set in winter.

O’BRIEN: One of my favorite horror movie set in winter is THE THING, the original John Carpenter one.

AX: Is it difficult to do practical FX in winter?

O’BRIEN: The scene where he has the girl tied up underneath the snow mobile and grinds her out – it was minus 45 degrees that night we were shooting it. There was a blizzard and they closed the roads. We’re shooting the scene, I get [actress] Kaitlyn Wong under the rig and we start to shoot, but the blood lines froze from the five minutes it took to take out of the truck to hook up and roll camera, the blood froze on the line – several times. It can be very difficult under time circumstances. It looks great though. At the end of the day, it’s something that’s interesting and has some texture to it – which is what I wanted to do.

AX: Did you use any CG – it felt like most of this was practical? Even the guy at the beginning felt like it was pretty much practical.

O’BRIEN: That is all practical. The only thing on that particular kill is he’s standing there is blue pants and it’s a [CG] paint down of his legs. Otherwise – all practical. Practical always looks better. The only CG in this film are paint outs and some snow blizzard enhancements, because you can’t predict the snow on a nineteen day schedule and can’t wait for snow.

AX: So this story will lead into the first WRONG TURN?

O’BRIEN: This will lead into WRONG TURN 5, which will be prequel as well. [laughs] It starts in like 1974, and we see Three-Fingers, Saw-Tooth and One-Eye as children. And then they escape this hospital, kill everybody and we cut to 2003, a year before the first movie was set. You have some kids on winter break for Christmas who want to go snow mobiling and skiing in a friends cabin. They take off, a big storm comes up, take a wrong turn, find this old sanatorium and it’s off to the races. When the [cannibals] drive off with the tow truck at the end, you can imagine them going off to a cabin and hanging out in the first movie.

AX: Do you get bigger budget doing these Fox DVD movies than you would with the Syfy Channel movies?

O’BRIEN: Oh yeah. I wouldn’t say a lot bigger, but certainly significantly enough bigger to able to shoot in North America, to be able to have a longer shoot, a more seasoned crew.

AX: What do you think is the appeal of the WRONG TURN franchise?

O’BRIEN: I think people are hungry for horror. That’s why the SAW films did so well and HOSTEL did well. They’re hungry for things they haven’t seen before and that’s horrific and over-the-top. I think there’s not a lot of those movies being made anymore and it leaves a spot in the marketplace for it.

AX: Would you come back for WRONG TURN 5?

O’BRIEN: I don’t think they will talk to me about WRONG TURN 5, until the units sold come in on WRONG TURN 4. It seems to be a franchise that works for them, and if I can keep on coming up with interesting stories and not doing the same thing over and over again – who knows?