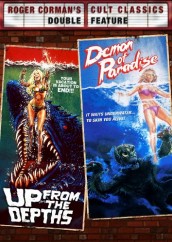 While the Roger Corman Cult Classics releases have featured, for the most part, the best the famed producer has had to offer from the late ‘70s and early ‘80s, the double feature of UP FROM THE DEPTHS/DEMON OF PARADISE scrapes the bottom of the underwater barrel.

1979’s unfortunate UP FROM THE DEPTHS was obviously an attempt to cash in on the success of PIRANHA, which featured a great script by John Sayles and excellent direction by Joe Dante. Unfortunately, by trying to ape the formula of scary mixed with dark comedy ends up seriously misconstrued here. The comedy is so over-the-top and the horror so ridiculous, the movie is absolutely torturous to get through.

A high-class resort in Maui is the setting, as the residents are terrorized by a prehistoric underwater creature jostled by an earthquake. The creature starts going after the locals pretty quickly, but the reaction by everyone is one of befuddlement and confusion, rather than abject terror.

Naturally, people decide to band together to fight against the creature, but by then, the movie has dragged on for so long, you can’t wait for it to be over.

Still, Susanne Reed is hottie and one of the few reasons to watch.

The dub job on the film is horrendous (the movie was filmed in the Philippines, so no wonder).

One of this film’s producers, Cirio Santiago served as director/producer on 1987’s similarly themed DEMON OF PARADISE. Also set at a Hawaiian resort, this is a quasi-remake of UP FROM THE DEPTHS by way of CREATURE FROM THE BLACK LAGOON.

This time, a local folklore of a creature turns out to be real as it starts stalking a resort. The creature is laughable and would have been better served if less of it was seen (ala UP FROM THE DEPTHS).

Thankfully, there’s somewhat of a script here, as the story follows the standard B-movie template (there’s the local police, an expert on the mythology, etc.). Unfortunately, the action and the direction is so inane, the movie is also just as torturous to sit through.

Of the special features, there’s the theatrical trailer and TV spots for UP FROM THE DEPTHS (which make it look like a far better movie than it actually is) and a nice eight minute featurette of Corman looking back on the film (and how he convinced Sam Bottoms to be in the film, in between his A-films). The FX guys (including Chris Walas) talk about how UP FROM THE DEPTHS was a salvage job in terms of creating new effects and gore.

Although listed, there are no special features for DEMON OF PARADISE (there’s not even a theatrical trailer). Not sure why, but, that’s the luck of the draw of these packages.

Both films feature an okay new anamorphic widescreen transfer, but it doesn’t really make it a better film. The colors and the look of both films seem washed-out, so this is likely the best elements that could be uncovered for two very forgettable films.

Then again, if you like this kind of exploitation cheese, you could find worse trash on the DVD shelves. Roger Corman’s films are always an acquired taste. Even his worst, is better than the worst some of today’s films have to offer and when they totally revel in their badness, like these two films, you can’t but help watch the car crash in its full gore glory.