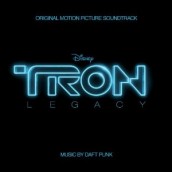 It’s a cold, dark and mesmerizing world 28 years later on the game grid, so don’t expect any of the playfully lush themes that Wendy Carlos gave you geeks the first time out- unless you’re counting Jeff Bridges’ brief A Capella improv at the start of LEGACY. What you will get from electronica superstars-turned-masked composers Daft Punk is an icily epic sound that brilliantly matches the new, austerely Kubrickian imagery on thrilling display, while also delivering on the whiz-bang action pitched towards a young audience whose listening tastes have significantly evolved since the days of 8-bit Atari music- not that Punk isn’t going to remind them of those glory days.

In a retro synth score year that includes the likes of THE SOCIAL NETWORK and SCOTT PILGRIM SAVES THE WORLD, LEGACY’s mosh pit of tastily familiar samples will undoubtedly return TRON-generation fans to the happy days of Vangelis and Tangerine Dream, not to mention progressive bands like Yes. Buoyed by an imposing motiff that might make listeners feel like they’re back in INCEPTION’s dreamscape, Punk’s score has numerous sonic terrains to offer, a mix tape of dance-dance revolution chases, glo-stick club tunes (which Daft is seen spinning), neo-Fascist marches and surreal, hardcore sci-fi atmospheres. Yet while they’re state of the musical art, Daft’s coolest trick is realizing that they can’t stint on the kind of emotional themework that only an orchestra can deliver to a movie score, backing up their stunning rhythms with hard-edged human players. Just as Carlos’ original score heralded the 80’s synth revolution, Punk’s work will undoubtedly serve as our musical millennium’s LEGACY as to how hip film scoring keeps evolving into an electro-symphonic hybrid that’s as much about technological innovation as it is about making us feel the awesomeness of the kind of imagery that both TRONs have in spades.

Of course when you’ve got a group of Daft’s popularity, gotta have-it-all Punk addicts are sure to be sent racing across the album grids to get what’s as close as possible to a complete LEGACY soundtrack- a multiple version venture that will lead them to two bonus tracks on iTunes, a bonus track on Amazon and a special English two-CD U.K. version. Even the MCP wouldn’t be this cruel.