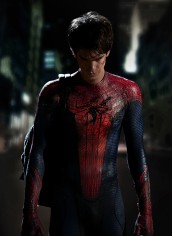 Glover loves the metaphor of the backpack

While everyone else was talking TV at NBC’s Winter TCA press tour in Pasadena, CA, geekdom was weighing in on the first photo released from the new untitled SPIDER-MAN 4 movie starring Andrew Garfield.

Naturally, the cast of the geek-centric NBC comedy COMMUNITY chimed in on the photo during the session.

Donald Glover who plays Troy Barnes on the show admits he saw the photo.

“The coolest part about it is he has a backpack,” says Glover. “I think that’s what makes the picture. It reminds you of how young [Peter Parker] is. That’s the part of Spider-man I always loved. He’s young and dealing with everyone hating him and he has all this weight on his shoulders.”

Of course, COMMUNITY creator Dan Harmon had his own take on the photo, adding about the photo dead-pan … “and how white!”