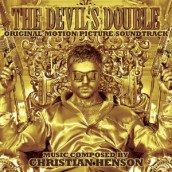 Christain Henson charms the hell out of Uday Hussein's beast

Uday Hussein has a rocking good time ravaging Iraq under dad’s carte blanche, not to mention the protection of a hapless look-a-like. It’s a musically mesmerizing balance between the fruits of evil, and an onlooker’s moral anguish, two tones merged into one beast for this killer alt. bio score by Christian Henson.

Just when you think you’ve heard it all in the sinister soundtrack land of Middle East-meets-west rhythms, THE DEVIL’S DOUBLE arrives to kick the genre in the ass as its antagonist does far worse things to his people. Not only does it help that Henson was a programmer on the intrigue of SPY GAMES, but his growingly impressive work on the twisted likes of SEVERANCE, BLACK DEATH and TRIANGLE makes him equally well suited to capture the emotion of real-life horror, as wrapped into ethnic gangsta music. There’s a razor-blade sharpness to Henson’s use of samples, scorching guitars, electro-rhythm sensuality, Arabic instruments and percussion, as if the evil of club music was stomping on a culture’s ancient sound- which is exactly the point for a villain, and his family, that crushed Iraq into the ground with all the excesses that dictatorship, and money could allow. It’s a hypnotic, processed sound that does its best to overwhelm the strings and melancholy piano of a man sucked into Uday’s depravity, a humanity that reaches tragic dimensions in the midst of Henson’s highly produced insanity.

At its thrashing best, THE DEVIL’S DOUBLE captures the feeling of being out of place in an Arabic pleasure palace of dark, rhythmic delights, its techno-ethnic energy beckoning you to enter as your western symphonic conscience tells you to high-tail it the hell out of there. But whatever your decision, this is a terrific invitation to the Hollywood party for Christian Henson, whose most impressive soundtrack yet puts new, energetic life into a musical, and film genre that’s needed some shaking up.

Click on link: To buy the THE DEVIL’S DOUBLE soundtrack