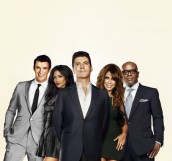 Some minor differences here or there but in reality, it’s another AMERICAN IDOL

Simon Cowell (and his too-tight shirts and new eyeliner) and Paul Abdul (and her crying and weird clapping) doing a music competition/reality show. A bunch of talented singers and a bunch of crazies and losers. Similar audition stories and a pompous host that is more annoying than anything else.

But wait … it’s still hot outside?

So yeah there are a little too many familiarities to THE X FACTOR than probably there should be to AMERICAN IDOL, given they are on the same G-damn network. But I guess the old adage applies – go with what works. Fox has the No.1 show on TV with IDOL, so why not bring a very similar show to the same network with just enough tweaks to be different and hope it pays off.

Of course, the “x-factor” to THE X FACTOR is the return of not only Cowell but his long-standing counterpart on IDOL in Paula Abdul – who was dispatched from the show after eight seasons. The other judges include Antonio “L.A.” Reid, apparently a music executive that looks exactly like Randy Jackson, and Cheryl Cole, the Girls Aloud singer that made a name for herself with a solo career mostly in England. Cole, of course, was replaced after just one episode by Pussycat Dolls lead singer and solo artist Nicole Scherzinger, after Simon decided Cole wasn’t the right fit. Scherzinger appeared in the second half of the two-hour premiere.

Honestly, not really sure why they got rid of Cole as she did a serviceable job in the opening episode and she is  much better looking than Scherzinger so it must have been either a British thing or an ego thing – especially with Cowell later asking Cole to be part of his other programs in England. Honestly, both Cole and Scherzinger didn’t really do anything special negative or positive so it must have been something behind-the-scenes.

Some of the other notable differences from IDOL in the opening audition rounds on X-FACTOR include:

Yet, there are many similarities: From the way the judges give a yes/no answer, from the losers and freaks that try out, to the slick Fox cut and paste job of the footage, to the sad and sappy stories of the contestants, to Simon’s trademark put downs (although he was wearing some eye liner in this episode that I found hilarious), and they even have the soda glasses in front of the judges – this time it’s Pepsi instead of Coke.

I do find it interesting that they have all of the contestants performing in front of an audience. Interesting because as we saw in the opening two hours of the show, the audience can get behind someone and encourage the judges to move them along to the next round as we saw in the season premiere. They can also turn on them rather quickly and make the judges’ decision that much easier. So it is maybe the most interesting dynamic in at least the audition phase.

Some of the stand outs included is 13-year-old Rachel Crow and 14-year-old Ellona Santiago as well as Simone Battle that opened up a discussion about a brewing “contest” between Simon and L.A. Of course, there were a full host of terrible performers but they did show some cool people that were older and might not be that good – in the case of Dan and Venita, the 70 and 83 years old retired entertainers – and some that blew the lid off as in the 42-year-old housemom.

I did like that they gave sufficient time to some of the contestants that were special such as the last performer in Chris Rene, the trash collector that just got out of rehab. They needed to give him that time because it showed that he’s a special, or at least could be, performer.

Still in the end, despite the fancy bells and different whistles that get slapped on THE X FACTOR , it is just another AMERICAN IDOL-ish show. Will it be successful? I think with Cowell at the helm it will be, but let’s call a music talent show, a music talent show and not candy-coat how different the shows are because they aren’t.