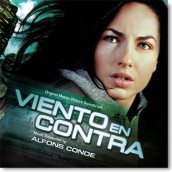 Alfons Conde goes from horror scoring to action with a bang

Alfons Conde, a Spanish composer better known among horror fans for the Movie Score Media releases of his utterly sinister soundtracks to THE ABANDONED, THE DARK HOUR and NO-DO finally gets the opportunity to score a film where a woman gets to fight back against evil odds.

In the case of MSM’s VIENTO EN CONTRA (AGAINST THE WIND), it’s a female executive who’s set up for a murder, and has to become a fugitive with her kid in tow. As with a heroine’s dead aim that seems to come out of nowhere in a film like this, Conde plugs us square in the ears with a pulse-pounding, studio-worthy action sound that he’s been hiding all along.

Exceptionally well-performed by the Macedonian Radio Symphony Orchestra, Conde’s score mixes lush, Hermann-esque tension with electronic percussion, delicate piano themes and symphonic action. It’s a female friendly approach that’s no less bad-ass for it, giving palpable emotion to the Hollywood chase rhythms that are rapidly become the approach for composers the world over. Yet it’s Alfons Conde’s melodic passion that makes VIENTO distinctive, while fitting right in to the chase-and-suspense groove that’s the international language of running for your life.

Click on link: To buy the VIENTO EN CONTRA soundtrack