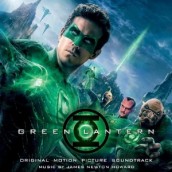 Not only does this summer stand as having the some of the strongest superhero movies in memory row, but also for having two of those pictures feature characters who were likely voted most impossible to pull off for live action.

First there was the mystical might of the Marvel god THOR, whose Asgardian grandeur was impressively hammered in by Patrick Doyle with a symphonic/ percussive score that virtually rebooted Doyle’s old-school orchestral sound to new levels of young Hollywood hipness. Then in the DC corner, there’s the GREEN LANTERN, Earth’s recruit to a legion of space cops who make the galaxy safe for justice with the force of their emerald will power, as contained in a ring.

If fans were astounded at seeing Thor wield a 3-D Mjolnir, they’ll truly believe the eye-popping spectacle that more than convinces that a man in a black-and-green energy suit can fly, propelled into the cosmos by solid filmmaking, likable performances and another terrific hybrid score that confirms the superhero street cred of James Newton Howard.

Starting off as a keyboardist and arranger for the likes of Elton John and Toto, Howard came into the art with an innate sense of pop rhythm, a gift for catchy, smooth melodies and electronic experimentation whose vibe showed through in even the heaviest dramatic scores. While Howard left most of the percussive lifting to Hans Zimmer when he co-tackled his first official superhero scores with BATMAN BEGINS and THE DARK KNIGHT, Howard got to considerably lighten up from that Strum und Drang when tackling THE GREEN HORNET. If Seth Rogan didn’t look nearly as silly as he could have in a mask and three-piece suit, then a good part of that legitimization came from Howard’s rocking retro soundtrack. Though its music flirted with near-spoof energy, Howard still managed to make the escapades within reach of the real deal by giving the characters a two-fisted orchestral backbone.

If HORNET ended up being better than it should have, Howard’s next shade of green do-gooding is for the real deal this time, especially as it plays a hero who’s as likable as he is fallible (as opposed to amping up an actor doing his darndest to overcome his obvious mis-casting). And once again, James Newton Howard colors his superhero score in two dimensions- the orchestrally muscular human one, and the other a striking spectrum of synth / sample experimentation that defines The Green Lantern’s unique status of being a sci-fi superhero.

Of course, that first honor would go to a Kryptonian named Kal-El, but his alien-ness pretty much ended with the powers granted by our red sun. The Green Lantern (as re-imaged in the late 1950’s) was as a jet-piloting earthman named Hal Jordan, who suddenly was assigned to protect the cosmos- an origin told here with remarkable faithfulness. While Howard makes the smart move of jumping right into his score with an exclamatory five-note theme that immediately imbues Hal with all the brassy heroism of Superman, much of the music’s build is purposefully weird to the ear. Howard indulges in ticking-clock percussion and eerie sound design-cum-music, its bizarre, unsettling quality reminiscent of the style he used for the ass-busting slugs of the insane guilty pleasure called DREAMCATCHER. Howard then thrashes with rock guitar and percussion to capture Ryan Reynold’s youthful charisma and confirm, a la TOP GUN, that there’s nothing’s cooler for playing a brash flyboy with blazing metal chords. It’s all a well-thought out build up for the much bigger universe that’s awaiting Hal, let alone the sense of a composer luxuriating in a whole bunch of 21st century gear.

Unlike today’s punk kids who arrive on the scoring scene with a wealth of tech savvy, Howard’s analog style has grown with a sense of discovery that’s let him create some truly striking synth tonalities in the likes of GRAND CANYON and FLATLINERS– a cosmic wonder in GREEN LANTERN that even conjures shades of Vangelis and Tangerine Dream. Yet there’s a cool grittiness to even the more far-out bits that show off Howard’s solid background in orchestral composing- as evolved from a pop background. It’s a talent that lets Howard be simultaneously hip and old school, as opposed to some other composers from (and before) his day whose electronics have sounded just a bit dated. Always sure to ground even the craziest bits with some thematic statement or melodic orchestral element, GREEN LANTERN has a neat ruddiness to its neo-industrial thrash that conveys a rough-at-the-edges guy suddenly given the universe.

Though Howard is sure to provide plenty of majestic excitement for Hal to revel in his powers, there’s also a brooding quality to GREEN LANTERN that truly elevates the film beyond the popcorn. Far from being a cocksure Maverick, tender guitars, pianos and poignant strings also reveal Hal as a bit of a loser for all of his bravado. It’s not only regret at failing in relationships, but also by blowing it with far more costlier collateral damage, something that’ made all the more humbling because he’s already been given the Lantern’s powers. Howard’s raging, Galactus-worthy villainy for guitars, voices and pounding brass get across the menace of a literal brainiac and a moon-sized embodiment of evil, creating a true, sometimes terrifying threat for Hal’s music to go up against. Yet that only raises the stakes for the thrill when Hal gets his Green mojo on, with Howard bringing on the symphonic might of the Lantern’s Socratic Oath with all the emotional wallop of watching a legendary character step into the suit he was destined for. It’s the kind of rousing musical geek-gasm that even Superman would be impressed by, let alone the legions of Green Lantern fans who will be pinching themselves as Howard lets the Lantern theme burst through the speakers at top volume.

GREEN LANTERN is all musical colors of the Hollywood blockbuster rainbow- at once aware of its hero’s cosmic significance, the utter sci-fi strangeness of his shtick, and the rhythmic rock imperative of most superhero scoring nowadays. Like the movie that proudly wears his ring, there’s nothing about GREEN LANTERN that’s escaped James Newton Howard’s musical sight.