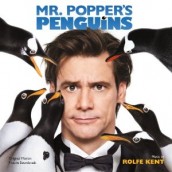 Ever since Mark Waters launched Rolfe Kent as the king of comedy scoring quirk with HOUSE OF YES, the two have oft-times been rumbling in the jungle with FREAKY FRIDAY, JUST LIKE HEAVEN, GHOSTS OF GIRLFRIENDS PAST and MEAN GIRLS.

Even when the subject didn’t seem to call for it, Kent’s uniquely eccentric love of ethnic instruments and seemingly incompatible musical approaches have always added new layers of subtext to his movies, especially when it came to chants and drums turning high schoolers into vicious predators prowling the cafeteria savannah.

Now Waters and Kent get the real, feathered deal as they tackle the stuck-up guy–meets-wacky animal genre with MR. POPPER’S PENGUINS, but given that this director and composer specialize in making studio comedies way smarter (not to mention better) than they have to be, POPPER ends up being a true delight- perhaps the biggest one of their collaborations so far.

Yet surprisingly, there’s just a little bit of the African cries and bright tribal percussion here (perhaps Kent wasn’t too big into Eskimo music). What POPPER wonderfully offers for its flipper-out-of-water story is a whimsical, George Gerswhin-esque orchestral sound of penguins on the lose in the big city, capturing both the goggle-eyed wonder at seeing the birds as much as the exasperation that the put-upon Popper had towards his unfrozen inheritance. Kent’s always evidenced a mischievous drollness in his comedy scoring, a tone here that at once shakes its head and smiles.

Even more fun then the score’s rhythmically rambunctious antics is the real emotion that develops between man and cute beast, with the score becoming quite moving as it reaches its happy ending. All funny animal scores should be this joyfully uncondescending.