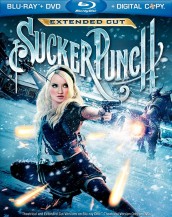 Also worth checking out: LORD OF THE RINGS TRILOGY EXTENDED EDITION, SEASON OF THE WITCH, THE WARRIOR’S WAY, RIZZOLI & ISLES: THE COMPLETE FIRST SEASON and more 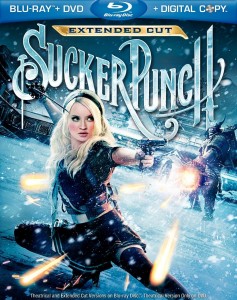 SUCKER PUNCH – SUCKER PUNCH is like one movie-length music video. A slew of unnecessary action sequences combined with a whole lot of hot babes that are dressed scantily but never really show anything to whet the appetite. It tries to be too clever in giving us the idea that our protagonist (Emily Browning) is über awesome because she has the ability to created a lifelike mystical world in order to get through her misogynistic and horrific circumstances facing her. So it’s just one big tease wrapped inside a music video surrounded by a JR Ewing-type dream sequences.

While the action sequences are pretty good – we get World War I zombies, a LORD OF THE RINGS-type battle sequence with a big ass dragon and killer robots – and there is some inventive stuff here when it comes to filming, the storyline is laughably bad. Zach Snyder, who directed 300 and WATCHMEN, has come a long way with his green screen filming and it is paying off in how things look, now he just needs better writers. Four motion comics come along with the Blu-ray version of the movie showing that Snyder tried to do the reverse graphic novel approach in create the film first, then do a comic. Worth renting on Blu-ray for the action sequences for sure – they stun in full HD. 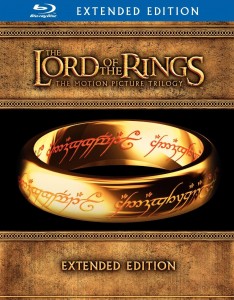 LORD OF THE RINGS TRILOGY EXTENDED EDITION – These came out on DVD already and the trilogy has already made its way onto Blu-ray but this is the first time the entire trilogy has been offered together in its Extended Edition format. Really, if you are gonna do LOTR, go big or go home. Why sit through 3 hours and 20 minutes of each film when you can sit through 4 hours? You have already invested the time, why not go all the way. Besides, the Extended Editions give you that much more about the characters and classic moments in the books that just didn’t make the original cut. When I first checked these out on DVD I was impressed as the footage was just as impressive as the rest of the movies and could have easily been left in had moviegoers been able to sit in a theater for four hours each go around. Highly recommended this week and you should indeed add this to your collection. 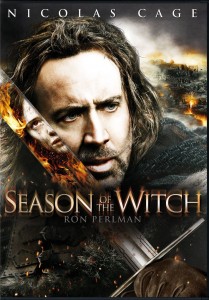 SEASON OF THE WITCH – Going into this medieval Black Death period piece you should probably know that it stars Nicolas Cage. And crazy Nicolas Cage is crazy. Which always adds a bit of humor when it comes down to it. Now, luckily it isn’t BURNING MAN crazy Cage but more CON AIR Cage crazy. The plot centers around a town that has been ravaged by the Black Death and all leads point to a curse put on by a young woman suspected of being a witch. To lift the curse, Cage along with a handful of others from the town journey across forests, mountains and a rickety old bridge in order to get to a castle full of Monks for help. The only problem is … they aren’t dealing with a witch, but something much worse. Not a bad film, entertaining for sure but it won’t win any awards for creativity. Worth a Netflix queue however.

THE WARRIOR’S WAY – The greatest fighter in the world after defeating his enemies takes a baby under his wing because he’s a good guy and can’t stand killing an innocent. He travels to an old West type town where a circus performs and there becomes embroiled in the struggle between those living there and an evil thug that visits occasionally to kill some of them and take their wares. Some pretty good action sequences and Kate Bosworth looks about as good as she has ever looked (she must have ate a sammich cause she needed it). 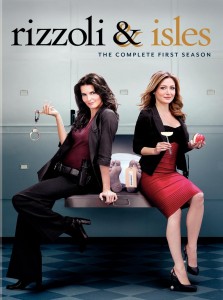 RIZZOLI & ISLES: THE COMPLETE FIRST SEASON – Angie Harmon and Sasha Alexander star as detective and medical examiner in this TNT series that’s funny, smart and enjoyable on a variety of levels. While on the surface the this would seem like any other series but with two strong female leads but the difference is that these chicks are hard. And by hard, I mean tough. They have all sorts of issues with families and personality and so on but they put it all on the backburner in order to catch serial killers and other nasty people that are doing nasty things in the Boston area. It is also nice that a crime show takes place in a city that is not L.A. or New York. With the second season coming, here’s a good chance for you to catch up on what you missed or get a refresher from the past season.

WAREHOUSE 13: SEASON TWO – The cool thing about WAREHOUSE 13 is that it keeps things interesting … when you have a full building of weird gadgets, artifacts and enemies, I guess the sky is the limit. While some believed that the show took some time getting started, those that stuck with it are now enjoying the show that has turned into a fan-favorite for some. In Season Two, the main plot remains the same with finding artifacts and defeating villains but there is a nice myth arch that involves a new villain that brings some different aspects to the show that has not yet been explored up until this time. With the third season about to begin, here’s a good chance to catch up on what you missed.