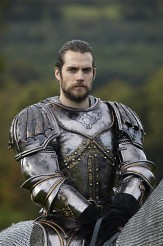 Looks like Brandon Routh will be shedding some Kryptonian tears – the actor is no longer the Man of Steel in the new SUPERMAN movie currently dubbed SUPERMAN: MAN OF STEEL.

The new Zack Snyder directed reboot (which will be produced by THE DARK KNIGHT’s Christopher Nolan) has picked a new Clark Kent/Superman and his name is Henry Cavill (best known for Showtime’s THE TUDORS). Following on the heels of British actor Andrew Garfield playing Spider-Man in Sony’s superhero reboot, Cavill also happens to be a Brit.

Cavill was on the short list to play Superman many years ago when McG was slated to direct the reboot before Bryan Singer became involved.

Speaking with The Hollywood Reporter, Snyder says, “He is the perfect choice to don the cape and the ‘S’ shield.”

The only question remains: who’s going to be the one to break the news to Tom Welling who really deserved a shot at playing the iconic Superhero after embodying him for ten years on SMALLVILLE?