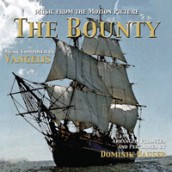 Vangelis gets a surprisingly good replay

The idea of having someone else try to re-create the inimitable sound of Vangelis is enough to induce a Vietnam flashback to the infamous New American Orchestra’s “adaptation” of 1982’s BLADE RUNNER, done at the time of the film’s release to cash in on fans’ desperate desire for an official soundtrack that would be twenty-five years in coming.

While admirers of his similarly excellent 1984 score to the BOUNTY are still waiting to hear its original tracks release beyond two cuts on Vangelis’ “Themes” CD, Buysoundtrax’ “new” BOUNTY album definitely won’t make the composer’s crew seasick, especially with Dominik Hauser at the helm.

An accomplished Hollywood keyboardist and orchestrator who’s contributed to such soundtracks as AEON FLUX and THE PERFECT GETAWAY, Hauser does an impressive job of recreating Vangelis’ mesmerizing wash of synths, managing to make his BOUNTY sound circa 1984, while also putting his own, unobtrusive modern touch on the material in a way that will intrigue, instead of offend most Vangelis purists.

Hauser’s BOUNTY performance shows the timeless electronic approach that is Vangelis’ trademarked poetry, his wave of hauntingly beautiful melodies here enough to captivate any crew to mutiny in favor of a tropical paradise. If anything, these BOUNTY cuts are enough to make you wish Hauser had gone for the whole kaboodle, though other selections from Vangelis’ scores to BITTER MOON and FRANCESCO fill in nicely.

Also on board for the more traditional source cues are singer Katie Campbell and violinist Elizabeth Hedman, whose sea shantyings are equally spot-on.

Board a “new”  THE BOUNTY HERE