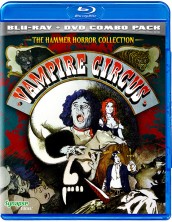 This overlooked 1972 Hammer cult classic mixes Fellini-esque imagery with vampires, nudity and now with a remastered print to boot 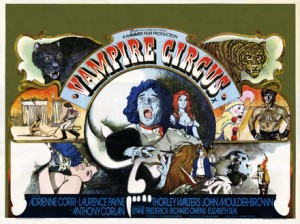 It’s a shame that British production company Hammer Films hasn’t received its due with more special re-releases on Blu-ray and DVD. Movies have certainly come out (Anchor Bay did a nice job in the early days of DVD), but rarely does Hammer get the deluxe treatment it deserves.

Thankfully, the recent Blu-ray/DVD combo of VAMPIRE CIRCUS remedies some of that as Synapse Films takes this classic circus horror film and delivers an amazingly beautiful looking new high-def transfer and then augments the set with some informative and well-made documentaries on the making of the film.

VAMPIRE CIRCUS is set in the 19th Century where a vampire slays a little girl, only to be staked by the locals. The vampire puts a curse on the town resulting in a plague, and many years later a circus comes to town that has ties to this slain vamp who is hoping to rise from the ashes once again. Pay attention, as future Darth Vadar David Prowse appears as the circus strongman.

Surreal, creepy and beautifully shot, VAMPIRE CIRCUS is a wonderfully twisted horror film that benefits from its setting and its tidy storytelling from writer Judson Kinberg.

Sex, gore and nudity are not shied away, while the atmosphere has a quasi-surreal, Fellini-esque quality to it which director Robert Young exploits as much as he can.

There’s a bit of Ray Bradbury’s SOMETHING WICKED THIS WAY comes mixed into the proceedings as well as echoes of Grimm Fairy Tales. This is definitely an overlooked gem – and a creepy one at that.

The featurettes include THE BLOODIEST SHOW ON EARTH, a thirty minute making of feature featuring historians and others (including filmmaker Joe Dante) talking about the inception of the film and where it fits in with Hammer’s legacy. Production problems and other issues are also noted among other revelatory tidbits in this excellent mini-documentary.

GALLERY OF GROSTESQUERIES runs down the history of “circus horror” from THE CABINET OF DR. CALIGARI to SHE FREAK. It’s very informative and shows how VAMPIRE CIRCUS came out during the downtrend of this subgenre.

The theatrical trailer, still and poster gallery, a VAMPIRE CIRCUS motion comic and a look at Hammer’s production company round out the set.

VAMPIRE CIRCUS is hands down one of the best circus horror films this side of Tod Browning’s FREAKS. Well-produced, creepy and wonderfully shot, this new Blu-ray incarnation finally showcases the care and tact into what made this film so memorable. It looks gorgeous – which is a nice contrast considering this movie is guaranteed to give you a nightmare or two.