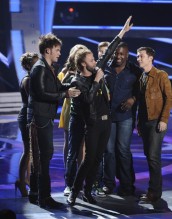 Haley Reinhart and Stefano Langone (again) in the bottom three

Well, I can hide my happiness over this elimination tonight on the world’s greatest karaoke competition, AMERICAN IDOL.

From the start, I have never understood why Paul McDonald made it into the meat of the competition above some of the other talented people they had. I get it that he’s a cute guy or whatever, which appeals to the tweens voting but other than that … the guy is boring as watching mold grow on toast. Seriously, he’s as interesting to watch as an armless mime. He dresses like a circus clown. He’s a fool on stage. So how the hell he lasted so long in the competition, I will never know.

Needless to say, I never got him, just like J.Lo said at the very beginning of the competition and week after week I thought he deserved to be the dude leaving rather than those that are actually interesting and entertaining and not his stupid boring ass up there. Well, finally, he’s gone from the show and it is a week too late as we had to lose Pia Toscano before we lost this clod.

But it does set up an interesting situation – like how many times will Stefano dodge bullets until he’s gone? Haley will have to really get her nice ass in gear if she wants to stay and will we see any more surprises in the next few weeks?

So that’s the result of the week and I’ll go through how it went down below, but luckily for you, I get to spare you the so-so duets, a zombie-themed, lame Ford commercial, a hot performance from Rihanna, a pretty good song from Kelly Clarkson and Jason Aldean, and a weird and pointless pep talk session from Rob Reiner.

First called up to the stage are Lauren Alaina, Casey Abrams, Haley Reinhart and Scotty McCreery. Scotty and Lauren are safe. Casey is safe. Haley is in the bottom.

OK, so I was two of three in my picks this week – I picked Stefano, Jacob and Paul. So who goes home? It isn’t a chick for the first time in the competition as Haley is safe. Stefano is safe again. Paul is gone.