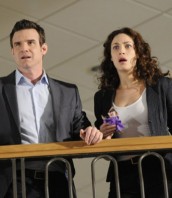 An amiable holiday episode, with an artifact making mischief in Los Angeles, Claudia making her own mischief back home and two great guest stars

When Los Angeles businessman Larry Newley (Paul Blackthorne, erstwhile star of Syfy’s THE DRESDEN FILES) has his home vandalized by an apparition that twinkles and swooshes, it means Pete (Eddie McClintock) and Myka (Joanne Kelly) have to say goodbye to their separate plans to spend Christmas with their respective families.

On investigation, it does seem like Larry is being visited by Santa Claus, who warns that Larry will disappear if he doesn’t mend his ways. It turns out that “Santa” is actually another version of Larry, wished into existence by his nine-year-old daughter, who’d like her dad to return to his Christmas-celebrating, making-time-for-family old self.

Meanwhile, Claudia’s (Allison Scagliotti) attempts to find cranky boss Artie (Saul Rubinek) the perfect gift results in her tracking down his estranged father (Judd Hirsch) and getting the old man to come for the holidays with the fib that Artie is dying. When Artie is reluctant to see his father, Allison tells Artie his dad is the one who will soon be gone.

It doesn’t take much to figure out where either storyline is going, what with the revamped CHRISTMAS CAROL on the one hand and a comedy-in-five-minutes version of a Hallmark/Lifetime movie on the other, but the buoyant script by Bob Goodman and the lively direction by show runner Jack Kenny make it all a lot of fun. Tying the artifact of the week to the WWI 1914 Christmas truce (subject of many fine folk songs) is a thoughtful, resonant touch. There’s also a nice fourth-wall tap as the episode opens, with the characters commenting on the theme. 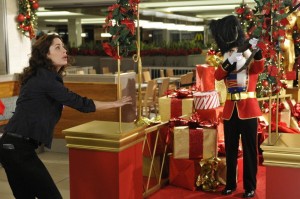 McClintock and Kelly play their agents as just a little more startled than usual, as the prospect of dealing with Santa is a big deal even to Warehouse personnel.

Scagliotti puts a lot of glee into Claudia’s kindly scheming and it’s a pleasure to watch old pros Rubinek and Hirsch play off each other, especially because they are given particularly humorous dialogue.

Blackthorne is very much in the spirit of things, both as the protesting Larry, who really does think that making money is the best thing he can do for his little girl, and as his ho-ho-ho-ing spectral doppelganger.

In case this fact isn’t clear from the above, there is nothing whatever affecting ongoing arcs here – the closest we get to this is Artie’s demeanor, even though Claudia’s stated purpose is to put a smile on Artie’s face, no doubt he’ll be back to grumbling next time we see him. “Secret Santa” states explicitly that these characters are family to one another. We knew that already without having it said, but the episode makes its case in a charming way.