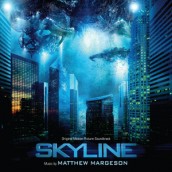 Music opens up an apartment under alien siege

If you’re doing a DIY, apartment-set riff on ID4 for the sum of 10 million dollars, then trying to make your production look like it cost 10 times that, you’d better have a score as big as your ambitions. Thankfully, the effects wizard Strause brothers have Matthew Margeson unleashing the big orchestral guns for their unfairly maligned, and thoroughly entertaining gonzo sci-fi pic.

With mad action skills learned during a career whose highlights range from assisting Klaus Badelt on CONSTANTINE, to arranging KICK-ASS and programming synths for ANGELS AND DEMONS, Margeson now has his own major debut to apply all of the rhythmically melodic tricks he’s learned alongside the hot properties of Hollywood action scoring.

Margeson uses his own, exciting voice as grand themes of emotional devastation mix with the eerie electronic pulses of brain-eating blue lights and bombastically patriotic air force vs. alien music that Randy Quaid would be proud to play for a kamikaze dive into a mothership.

Most importantly, Margeson’s powerful score is no small reason for SKYLINE coming across as a film that’s far bigger than it is, playing the shock and awe that’s going on outside the windows of its apartment-trapped, good-looking heroes. And after the unexpectedly gnarly guitar cue for the film’s cool twist ending, I can’t wait to hear what he’ll come up with if the Straus brothers attempt another guerilla flick for the end of the earth. In any case, SKYLINE sounds like it’s just the beginning for Margeson.