The director/actress screens her 25 minute documentary about Gary Oldman

Ever wonder what might be going through Gary Oldman’s mind if he directed a Jewish hip-hop music video? You can find out at the DVD release party for director Juliet Landau’s TAKE FLIGHT, a twenty-five-minute documentary chronicling Oldman’s work with the band Chutzpah.

The documentary will be screened and available for purchase Sunday night, Dec. 12, 6 PM at Meltdown Comics, 7522 Sunset Blvd., West Hollywood 90069. 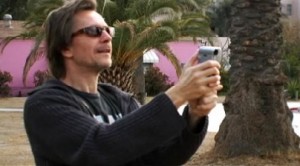 There will be a musical performance by Amy Kuney and the band Common Rotation (which features Adam Busch, who appeared with Landau in BUFFY THE VAMPIRE SLAYER, as well as Eric Kufs and Jordan Katz). Landau will do a question-and-answer session following the screening of TAKE FLIGHT, then sign DVDs for purchasers.