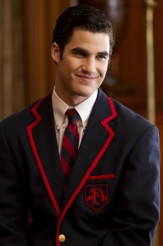 Sectionals are here again - does New Directions have what it takes? Oh, come on!

There’s a part of me that would really like to see GLEE do more episodes like “Special Education” and “Never Been Kissed” – ones that actually feel well constructed and tell multiple stories that actually tie together properly.

It’s also refreshing, in the case of “Special Education” that Sue Sylvester (Jane Lynch) isn’t shoved down our throats just to have her there for some unneeded conflict. In this case, she’s totally M.I.A. and the show, weirdly, is better off for it. No guest stars either. No gimmicks. Just the main cast, who are allowed to thankfully shine.

The big thrust of this episode is Sectionals. Yes, it’s time for New Directions to compete for a chance at the big prize, and this time their competition are a group of elderly crooners and the Dalton Warblers, which now have Kurt (Chris Colfer) as part of the mix.

However, Mr. Shue (Matthew Morrison) decides to throw out his predictable playlist and not give Rachel (Lea Michele) and Finn (Cory Monteith) the main solo. Instead, Quinn (Dianna Agron) and Sam (Chord Overstreet) get that honor doing a great rendition of the DIRTY DANCING staple “(I’ve Had) The Time of My Life.”

Before the group can sing though, their personal lives are in disarray. We get a glimpse into the pretty cute relationship between Artie (Kevin McHale) and Britney (Heather Morris) who have a major misunderstanding, while Finn and Rachel are clearly on the outs (she found out about him and Santana).

Mr. Shue’s love life isn’t going too well either, as Emma (Jayma Mayes) has run off to marry her dentist true love (John Stamos) in Vegas.

Meanwhile, Kurt is having a hard time assimilating into the very structured Dalton Academy and the Warblers. It’s a hive mindset, something Kurt is not used to, but he learns some lessons along the way about the differences between the Warblers and New Directions. 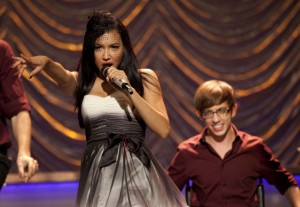 This episode is filled with one great moment after another. Perfectly realized in the script by co-creator Brad Falchuk and directed with finesse by Paris Barclay. The episode features some fantastic moments including some great nuanced moments between Kurt and Rachel (they can be friends, now that they’re not competition), Artie and Britney (more, more, more) and the continued evolution of Puck (Mark Salling) as bad boy with a little more soul than we realized.

The song selection is okay – nothing that stands out except for The Warblers stellar take on the Train song “Hey, Soul Sister.” Once again, newcomer Darren Criss steals the show as Kurt’s mentor Blaine. The elderly group singing “The Living Years” feels too cheesy and on-the-nose for the show. It’s almost as if the writers came up with the gag at the beginning of the season and couldn’t wait to deliver the pay-off, but the pay-off is more disquieting than funny.

I think one of the important things GLEE needs to address and remedy in the second half of the season is more consistency and more ongoing storylines that carry over week to week and evolve naturally instead of in TV time.

This whole Sectionals episode could have actually been split into two different weeks. Too much story is crammed into this one episode that would have been better to let breathe over a couple more episodes.

However, “Special Education” also works fine, just as it is. A solid hour crammed with great story is better than too many songs crammed around too little story (which GLEE has done on many occasions too). One more episode (the Christmas one) and it’s hiatus time. It’s going to be a long winter for GLEE fans.