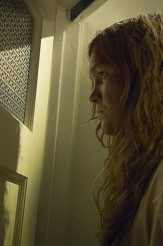 This line, a description of Mary Poppins, also sums up an episode with a couple of big surprises, leading to a dilemma Dexter has never faced before

Bless DEXTER. Five seasons in, it still has the ability to surprise us with twists small and large. In “Practically Perfect,” the show is paying off so many threads already that we aren’t missing the one huge arc of a season-long villain. The show runners have said essentially they can’t attempt to top John Lithgow’s Trinity Killer right away, and that seems a sensible assessment. Instead, they give Dexter (Michael C. Hall) a whole new kind of problem.

“Practically Perfect” is how Mary Poppins described herself, and between Dexter and Deb (Jennifer Carpenter) – who interrogates prospective candidates as though they are suspects – that may be who the Morgan siblings are holding out for as a nanny for baby Harrison. Fortunately (it appears for now, at least), the eminently capable and attractive ex-nurse Sonya (Maria Doyle Kennedy) shows up, with great qualifications and a great attitude.

Deb is still delving into the Santa Muerte killings, which leads to another murder. Quinn (Desmond Harrington) continues to delve into the true identity of “Kyle Butler” (the alias Dexter used while stalking Trinity last season). There is surprisingly serious fallout from Batista’s (David Zayas) bar fight in the previous episode. Meanwhile, Dexter continues to stalk roadkill cleanup worker by day/serial killer by night Boyd (Shawn Hatosy), who turns out to be better prepared than Dexter expected for an attack.

Dexter does finally manage to do his ritual with Boyd, albeit in the man’s home, rather than his intended isolated site – only to find the whole deed has been observed by Boyd’s most recent intended victim (Julia Stiles), who is tied up and gagged in the closet.

This leaves both Dexter and the audience with their jaws dropped. Dexter hasn’t had this sort of dilemma before, and even though the previews show Harry’s ghost encouraging him to get rid of the witness, we can be pretty sure he won’t (he was loath to kill Doakes, and Doakes was actively tracking him). What he will do and where this may go is a fascinating, wide-open question.

Dexter’s pursuit of Boyd turns out to be both amusing and twisty in its complications. Hatosy’s mixture of regular guy and creep is suitably unsettling. We can see he’s not in the league of some of Dexter’s other nemeses, so when he manages to turn the tables briefly, it’s a nice moment that again is equally startling to us and our protagonist.

The B plots are also compelling. Like Deb (who utters another of her great multilingual malapropisms in trying to say “Santa Muerte”), we are eager to learn the identity of the serial killer, or killers, she is tracking on her case. We’re worried for Batista – Zayas is steadily totally convincing as the doggedly loyal detective – and we wonder if there’s more up to Mary Poppins, er Sonya, than meets the eye. Kennedy is charming and soothing, playing Sonya as exactly the sort of nanny one would trust with an infant.

This episode has everything going on every level. The title really sums it up.