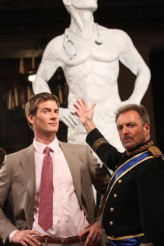 There are only a few shows I look forward to week after week like CHUCK, yet the first part of Season Four has produced three rather lackluster episodes in a row.

The show is fumbling. It doesn’t know what to do with the relationship between Chuck (Zachary Levi) and Sarah (Yvonne Strahovski) resulting in silly shtick like (“is our relationship going good?” “Would she marry me if I asked her?”) as opposed to finding quirkier ways of handling these topics that don’t feel as forced.

The show feels like the soap opera version of CHUCK – way too heavy and depressing and not as fun and lively as the old version.

In “Vs. The Coup d’Etat,” the show travels back to the fictitious country of Costa Graves and the fictional dictator Premier Alejandro Goya (Armand Assante) whose life was saved by Captain Awesome (Ryan McPartlin) last season.

Goya wants to return the favor to Awesome and Ellie (Sarah Lancaster) by having him visit the country on his dime. Sarah and Chuck come along, but a coup d’Etat by Goya’s disgruntled wife turns into another reflection of Sarah and Chuck’s own dysfunctional relationship.

Meanwhile, Ellie discovers that she’s being selfish for not letting Chuck be a spy (but doesn’t give him permission to re-enlist either), while Chuck reveals he’s looking for their mom.

Casey (Adam Baldwin) is sidelined again this week with his injured leg, but he gets some interesting interplay with Morgan (Joshua Gomez) who has the hots for Casey’s daughter.

It’s a rather lackluster affair. The characters all feel depressed and devoid of the sparkle they once have, and they’re sucking the air out of the room every week they go down the path of making Chuck and Sarah like some kind of whiny couple off of 90210 or BROTHERS AND SISTERS. Bring back the Chuck and Sarah we all loved.

Chuck gets a little closer to finding his mom (Linda Hamilton), and what we’re starting to learn is that she may not be the good guy in the process.

Let’s hope this storyline gets more heat in the coming weeks and we get the old fun side of CHUCK back that has sorely been missing (the season premiere excluded) this year.