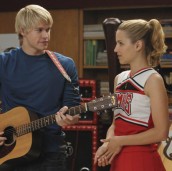 This is the old GLEE, from the early part of Season 1, that we’ve missing, as show choir gets into a competition about who can sing the best duet

After a couple of bumpy weeks, GLEE gets back to basics with a solid story that forces the show choir kids to put on their best “Duets” for a free meal at a restaurant called bread sticks.

The competition really brings out the best (and some times worst) in the students, as they all vie for the prize. It also allows the show to focus on the characters themselves in simple and effective ways.

And there’s not even a moment with Sue (Jane Lynch) in the entire episode – which actually is a nice change of pace. Sue shouldn’t be used all the time – she’s the spice to the show’s already busy mix, so when she comes in, she should be the closer, not the opener, stirrer and closer.

Of the revelations this episode is Kurt (Chris Colfer) having to accept he won’t find true love until he finds someone as honest and open as him. Finn and Rachel (Corey Monteith and Lea Michele) try to throw the competition so new guy Sam (Chord Overstreet) can good about staying in show choir.

Sam starts off a budding relationship with Quinn (Diana Agron), so it will be interesting to see if there’s something real there, or if it’s a fleeting attraction.

This episode also showcases Brittany (Heather Morris) at her weirdest. Not only does she make out with Santana (Naya Rivera), but she also has sex with Artie (Kevin McHale) and takes his virginity.

She’s dumb as a stick, but she seems to not like being the class slut 100 percent, and she also seems to like Artie for reasons beyond just getting the chance to push him around in the wheelchair. It’s a weird little thing they’re doing with her, aided by a tragically bizarro moment when she’s pushing a meatball (ala LADY AND THE TRAMP) solo at the Breadsticks restaurant.

The songs though really shine this episode. There’s a nice mixture of rock, show tunes (Kurt gets to do a number from the film VICTOR/VICTORIA) and Mercedes (Amber Riley) and Santana show off a kickin’ rendition of Tina Turner’s “River Deep, Mountain High”. They really hit that song on all cylinders with some great hip shakin’ and singing. Even Mike Chang (Harry Shum Jr.) who has had little singing and screen time, gets to show off his personality for a change in a duet with Tina (Jenna Ushkowitz).

It’s all pretty cool stuff – simple and sweet without getting too icky and over-indulgent. It’s way GLEE should be all the time, but when you have to not only service story, songs and musical numbers on a weekly basis, you’re not going to hit a home run every week.