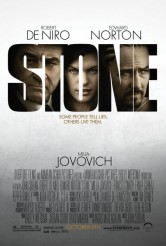 STONE takes its title from the nickname of Edward Norton’s character, who when we meet him has done eight years of a ten-to-fifteen sentence for arson. The incident also caused the deaths of Stone’s grandparents, although his cousin was convicted of the murders. Stone is looking to get paroled, which means he has to have some sessions with Jack (Robert De Niro), the prison’s advisor to the parole board on which inmates seem ready to take responsibility for their actions and which ones should stay locked up.

Stone has a good time arguing philosophy with Jack and getting the older man’s goat, without ever saying the words Jack needs to hear in order to be comfortable about recommending parole. Instead, Stone’s wife Lucetta (Milla Jovovich) begins a full-court press of persuasion with Jack, who is married to the religiously devout and unhappily alcoholic Madylyn (Frances Conroy).

The actors are all extremely good, with Norton’s performance and Angus MacLachlan’s screenplay combining to keep us constantly wondering if Stone is playing Jack or just so caught up on his own voyage of discovery that he can’t stay still long enough to engage in a conventional way. However, STONE’s relentless theological musings don’t seem to build to any moral point. Stone seems to connect with the tenets of an obscure religion he reads about in prison. Agnostic Jack wants to believe, consulting his family priest and constantly listening to Christian radio, without feeling any connection to faith. It’s sad, but it is so repetitive and De Niro plays Jack as such a stony grouch – albeit he does a great and convincing job of it – that, as it’s not having an impact on him, it’s more irritating than thought-provoking for the audience.

An opening sequence, with Enver Gjokaj (late of DOLLHOUSE) and Pepper Binkley as, respectively, the young Jack and the young Madylyn, shows us that Jack is capable of some genuinely evil coercive tactics when crossed. However, this information plays a surprisingly small role in the body of the film. We’re not too worried that Jack is going to really go off on the people in his orbit, partly because there’s nothing to make us think he’s still got that flash-fire reaction to things and partly because we’re not very worried about what he’ll do to Stone.

Jovovich is sweet and determined as Lucetta, a woman whose behavior is all about trying to keep people from abandoning her and Conroy has a bone-deep grief and fury that makes her riveting to watch.

The actors make us believe all these people exist, but while the journey each is on has its moments, only Madylyn is fully compelling. As for the conclusion, it is logical given what has preceded it, but it doesn’t pack much of a punch.