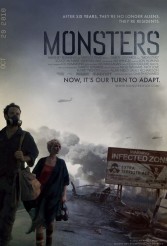 An intriguing, quasi-art-house look at the alien invasion genre

MONSTERS is an inventive low-budget blend of science-fiction, horror, character study and political parable. It hits this last aspect a bit hard, but otherwise, it’s very entertaining. Director/writer Gareth Edwards admirably avoids the one-two-three-something-jumps-out-of-the-dark scares common to creature features in favor of a steady sense of tension. The film has the “what-if?” factor of DISTRICT 9, the giant entities wreaking havoc of CLOVERFIELD, the astonishing natural splendor of its Mexican/Central American locations and the soul of a low-budget indie.

We are told at the outset that, six years ago, a NASA probe containing samples of extraterrestrial life crashed in the jungles of Central America. When these samples produced large, uncontrollable new life forms, half of Mexico was quarantined.

In the present, this situation is known to the world and for the most part viewed like a war taking place a few countries away – too bad, really, but not something anyone outside the zone worries about much. It does become a problem for roving photojournalist Kaulder (Scoot McNairy) is ordered by his boss to escort and make sure the boss’s daughter Sam (Whitney Able) gets safely back home before the border is closed indefinitely. When the first few simple-seeming plans don’t pan out, Kaulder and Sam are forced to take a dangerous overland route through the “Infected Zone.”

It is a measure of the success of MONSTERS that when we see the extraterrestrials, they are rather awe-inspiring rather than silly-looking, which is really saying something, as they closely resemble giant octopi that can hover in midair. Edwards, who reportedly encouraged his cast to improvise, also gets extremely natural performances from McNairy and Able, as well as some outstanding ones from the supporting cast. There are small, astute nuances in dialogue and behavior; we always feel like we’re watching real people slogging around in a very real situation.

One of the things going on in MONSTERS is a parable about migration to the U.S., with our two leads fleeing a lethal clash. It’s clear enough that we don’t need the underscoring provided by a few lines here and there – we can understand what we’re watching without being told.

Edwards gets some stunning shots, particularly when Kaulder and Sam come across an ancient temple. The filmmaker has also managed to find some of the most horrifically ravaged urban landscapes imaginable, so that we’re truly afraid of the damage the creatures can inflict before they show up in any major way. There is also a fair amount of havoc wreaked by the human military, and there’s a suggestion that terrestrial aggression may be exacerbating the ongoing threat.

MONSTERS is a bit slow in places, but it is on the whole very effective, causing us to grow increasingly afraid of what may be in the air, in the water and behind the trees. It also makes us reflect easily on what we would do in the characters’ situations and, as part of the overall feel, it gives us the steady course of two people getting to know one another in very credible fashion.