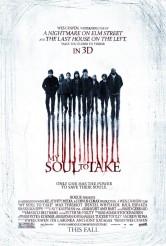 An unexpected, pretty good mixture of a Wes Craven film – which this is – and a John Hughes-style high school dramedy

Wes Craven’s most famous filmmaking creation is still arguably the NIGHTMARE ON ELM STREET franchise, but the supernatural aspects of his latest offering as writer/director, MY SOUL TO TAKE, are closer to those in THE SERPENT AND THE RAINBOW and SHOCKER.

What’s surprising is that SOUL is sincere about depicting the high school travails of its main characters – this goes well beyond the interest SCREAM (directed by Craven, written by Kevin Williamson) showed in such things. Instead, it’s as though the horror elements of SOUL were married to a John Hughes movie, or even Craven’s school-orchestra drama MUSIC OF THE HEART. Plenty of horror films (including a number of Craven’s) are set in and around high school, but few deal this extensively with high school. The shift in emphasis is a bit surprising, but on the whole, it works.

A prologue introduces us to the troubled Abel (Raul Esparza), resident of the pleasant hamlet of Riverton, CT, happily married with a wife, a young daughter – and severe multiple personality disorder. Poor Abel is a good guy, but can’t control the one personality that’s homicidal and really angry about Abel’s attempts to get psychiatric help. This leads to the death of Abel’s wife and a number of other people, a run-in with the police and Abel’s apparently dead body vanishing into the local river. Medic Jean-Baptiste (Danai Gurira) says that in Haiti, it would be believed that Abel had not multiple personalities, but multiple souls, one of them very evil. One other interesting aspect of the evening: when Abel goes missing, seven children are all born prematurely in the local hospital.

Sixteen years later, the big mutual birthday is celebrated by the kids and their friends with a ritual in which one of them symbolically kills “The Ripper,” embodied by a giant puppet, which (their insta-legend has it) prevents him from coming after them from beyond the grave. However, this year the chosen Ripper slayer, Bug (Max Thieriot), who is sensitive and innocent to the point of seeming a bit backward, is so frightened by the puppet that he falters, and the ritual is interrupted before it can be completed. Although Bug is the only one who takes the ritual seriously, soon enough, fatalities start piling up. Did Abel’s multiple souls go into the seven now-adolescents born on the night he disappeared, or is Abel himself back?

MY SOUL TO TAKE keeps us guessing for awhile as to who’s perpetrating the present-day crimes, but the film’s originality and, well, actual charm lies in its characterizations. There’s a fundamentalist Christian teen (Zena Grey) who is depicted as a likable, caring (albeit eccentric) young woman and the mean girl who rules the school (Emily Meade) gets a great back story. There is also a very warm friendship between Bug and his best friend Alex (John Magaro), and a terrific classroom sequence about condors where a science project does all it is intended to do – and then some.

For that matter, the use of Native American legend surrounding condors provides an intriguing component to the rest of SOUL’s mythology, but Craven’s script doesn’t entirely come together in terms of its spiritual ambitions. There are too many elements that seem to contradict one another. Also, supernaturally motivated though the killer may be, SOUL adheres closely enough to slasher formula to hit some rote genre patches when it comes to the murder and fight scenes. The 3D is unobtrusive, but doesn’t add anything noticeable to the attractively-filmed proceedings.

The cast is extremely good, with Thieriot treading the line between innocence, intelligence and ferocity well and Magaro impressive as a young man whose appalling home life is nudging him toward the edge. Grey is delightful as the devout, thoughtful one of the birthday group. Esparza (a four-time Tony nominee) demonstrates entertaining flair in playing seven battling personalities simultaneously without seeming the least bit silly.

MY SOUL TO TAKE is a little uneven, but at its best, it’s remarkably good.