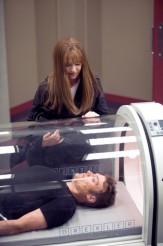 Another solid episode that proves the Other Side has Whackos too

There are two universes in question on FRINGE. Ours (presumably) where our history is currently happening except for the inclusion of strange creatures and humans with weird powers as the result of experiments by Walter (John Noble) and other scientists.

The other universe, or “over there,” is an alternate universe and a much darker place as it has been ravaged by the effects of when Walter first crossed over to steal Peter (Joshua Jackson) in order to replace him since his son died.

Over there isn’t as different as we first were lead to believe. Yes, there are anomalies that emerge here or there, yes they have blimps floating everywhere, yes there was no 9-11 (or they stopped it from happening). But the people themselves aren’t all that different from their counterparts. Charlie still acts like Charlie. Broyles, while more devious, still cares about his team and wants what is best for them. The major differences are with Dark Olivia (Anna Torv) and Dark Walter.

Both of these characters appear to be the direct opposite of those in our universe. Our Walter is a nice, confused and peaceful man. Dark Walter wants to destroy our universe and wants to use his son as the key. Our Olivia is emotional, thoughtful and caring. Dark Olivia kills anyone that gets close to her and is doing everything to help Dark Walter’s goal come to realization.

But we learned a bit more about the alternate universe with “The Plateau.” They have freaks too. What I liked about this episode is that we got an entire episode to explore the alternate universe again, of course, with our Olivia brainwashed into thinking she’s the alternate Olivia. We spent an entire two seasons examining the results of the experiments that Walter, William Bell and other scientists have done on the population in order to prepare this world for the coming war. This time we got to see that the other side has its own fair share of people that have weird or strange powers that either have been manufactured by others or developed as a result of the strange anomalies.

This time it was a guy that could predict how certain objects would react given a single starting point and end with the death of someone. Call if a Rube Goldberg murder.

Perhaps more importantly, we saw that no matter what has been done to our Olivia, it appears as if her connection to Peter (Joshua Jackson) is way too strong and will eventually be the hook that allows her to realize who she is and where she is.