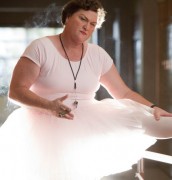 Finally, the best episode of Season Two, both in story and song selection, with extra emphasis on Kurt’s troubles with fitting in

Something very right happened on the GLEE episode “Never Been Kissed.”

It was an important episode about fitting in, feeling bad about yourself, forging new friendships and singing songs that actually fit perfectly in with the theme of the episode (and without feeling force-fed).

The anchor for this episode is the tortured Kurt (Chris Colfer) who is going through the struggle of being the only openly gay student at school. He’s constantly tortured by a vicious jock who throws him against his locker every day.

This kind of abuse (and other things) makes Kurt feel out of place, so he checks out an all-boys private school whose show choir team is actually considered cool at the school. He wasn’t spying on the group (they will serve as competition in the forthcoming sectionals) so much as searching for a way out of his own school. There, he meets an openly gay student who is accepted for who he is – Blaine (Darren Criss).

Soon, a quasi-relationship develops between Kurt and Blaine, but the big twist is the jock who torments Kurt is closeted. When Kurt gets fed up and confronts him, the jock plants a big, serious wet one on him.

Didn’t see that last bit coming, so it will be interesting to see how that develops. In the interim, the Kurt/Blaine pairing is cool, but I would say the one thing that does annoy me is pairing Kurt up with someone named “Blaine.” It’s such an obvious, predictable name for a gay character, that it almost seems to be in jest. Blaine, really? Couldn’t Kurt just fall for someone name Michael? Does it have to be such a foo-foo name. Stereotyping indeed.

The other half of the episode is devoted to the Glee club using the twisted images of Coach Beiste (Dot Jones) as an alternative to a cold shower when they get too hot and heavy with their partners. Ultimately the Coach finds out about it and quits. Mr. Schuester (Matthew Morrison) tries to give her a pep talk – and even gives her a kiss in a very affecting moment. The big pay-off though, is the apology that the guy’s give Coach at episode’s end.

Mixed in with everything, is the return of Puck (Mark Salling) who forges a friendship with Artie (Kevin McHale) as part of his community service work to stay out of juvie.

The big surprise is the consistency in the songs – which get back to vocal harmony theatrics, and less on actual physical instruments which has been a bit of a crutch this season (i.e. the Britney Spears episode).

Every song here is a stand-out, though the all-guy a cappella version of Katy Perry’s “Teenage Dream” is stunning – and provides such an emotional texture for Kurt and the realization that he may have found a place at the all-boys school that might accept him for who he is (it doesn’t hurt that the school likes their Glee club).

There’s Salling and McHale’s great duet on Bob Marley’s “One Love (People Get Ready)” that is stripped down and really fantastic. The episode also presents the second annual boys vs. girls mash-up competition.

The girls rock out with a mash of the Rolling Stones “Start Me Up” and Bon Jovi’s “Living On a Prayer.” It’s a great blend and the performance (with the girls looking extra super hot in rocker garb) is well choreographed. The actresses all look like they’re having a blast getting to do something out of their normal comfort zone as well.

The capper is the boys mashing up The Supremes “Stop! In the Name of Love” with Beyonce’s “Free Your Mind.” Only GLEE could make this one work – again, delivering something so original and fresh, yet something that emotionally taps into the essence of this episode.

Another positive is the choice use of Sue (Jane Lynch). When they overuse the character in any episode it can be a bit of a buzz kill, but when she’s given isolated moments to spread her deliciously evil banter, it really accents and balances the show.

Overall, writer Brad Falchuk delivers one of the best episodes of Season Two – totally focused, wonderfully insightful and above all full of emotion and heart. It’s nice to see the show finally getting its Season One mojo back.