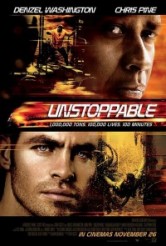 UNSTOPPABLE is an apt name for this action thriller, which mimics the momentum of the title menace, a 39-car train carrying explosive, poisonous cargo that is accidentally set loose at speed upon the tracks. If this sounds like the plot of an average TV disaster movie, it is. However, this is an instance where it’s all in the details. Director Tony Scott and writer Mark Bomback demonstrate that, given the right treatment and budget, the most tried-and-true material can be made into an effective nail biter.

An opening title tells us that UNSTOPPABLE is “based on real events.” Since we haven’t heard of a chunk of Pennsylvania being melted off the map, this is a clue how it all turns out (albeit that “based on real events” notice gets practically contradicted by the ending disclaimer), but that doesn’t stop our very real, ever-growing fascination with the question of how anybody is going to stop this monster of a train without having to derail it and causing an explosion large enough to wipe out at least one town.

Denzel Washington plays Frank Barnes, a veteran train engineer with 28 years on the job, who is paired with novice train conductor Will Colson (Chris Pine), who is in his first day on the job. Will has a chip on his shoulder and some marital issues, while Frank is playing it cool about his own problems. The B stories soon take a back seat to immediate events, as a couple of slacker train yard employees try to take a shortcut in locking down train 777 and, through a series of errors that compound one another, wind up outside the train cab as the thing accelerates out of the rail yard, putting it on a collision course with Frank and Will’s engine.

Bomback’s script comes up with a perfectly good reason why Frank and Will can’t just pull over at the outset (Will makes a newbie screw-up and puts too many cars on the train) and the film develops its own crazy momentum from there. The casting is shrewd – between the heroic screen baggage Washington carries with him and the sense of innate sober competence he gives to Frank, we never doubt the character can handle just about anything. Pine imbues Will with a prickly energy and stamina (and, for those following his career, comes with the background of just having played Captain James T. Kirk). We believe these two can tame the beast if anyone can, and director Scott does a great job of making this look impossible, with the train rushing on and rumbling so menacingly that the theatre seats shake with its passage.

The command center story is about what we’d expect: harried yard master, played by a very likable Rosario Dawson, trying to rein in the situation; villainous boss, played well by Kevin Dunn, putting the rail company’s bottom line over human life (which doesn’t make sense when we think about it, because the ensuing lawsuits would be more costly than the loss of the train and its cargo, but never mind); rail safety inspector played by a suitably scruffy yet erudite Kevin Corrigan, who is there with the statistics and exposition to make things just that much more clearly nerve-wracking, etc.

It’s rare these days to see an action film so streamlined and on target, but Scott keeps us completely focused on the careening 777, with a pace that matches that of the runaway train and a skill at making us ever mindful of just how dangerous this thing is without overdoing it. We become thoroughly caught up in the tension and wondering if/how even our unstoppable heroes can possibly avert disaster. UNSTOPPABLE is lean, driving and accomplishes just about everything it sets out to do.