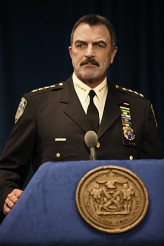 At this summer’s CBS TCA’s, Selleck took five to talk about his new role, shooting in New York and the show airing on Friday nights.

TAKE 1
About not wanting to be part of an ensemble instead of being the lead …
“Having done the lead, like I did with MAGNUM, I was in every shot,” says Selleck. “I’m not complaining, but it was a tough road. The show was never cancelled. I kind of left after eight years because I was tired from it, not of it. And [BLUE BLOODS] seemed to fit perfectly. The script was perfect and the idea that it was going to shoot in New York was too good to pass up.”

TAKE 2
On his character wearing the police  uniform …
“He is the Commissioner,” says Selleck. “He came up through the ranks and was a beat cop. Ceremonially, I think him as a matter of leadership and all that he prefers to wear his chief’s uniform. I think this is very important for this character, who I’m still finding out a lot about, was to wear that uniform. The Commissioner doesn’t always do that.”

TAKE 3
On making sure the show shot in New York for New York …
“When I heard thoughts of ‘well, maybe we’ll shoot it somewhere else,’ I said, ‘look, it’s difficult for me to argue that shooting a show about New York won’t be better shot than in New York,'” explains Selleck. “That’s not an argument that would hold much water in, for instance, Toronto. No offense, Toronto, but I’ve shot there, and it’s a lovely place to shoot, but it’s different.”

TAKE 4
On BLUE BLOODS airing on Friday nights …
“If it’s good, they’ll probably watch,” says Selleck. “I did one of these [press tours] a long time ago for MAGNUM and I got the same question, because Thursday nights were one of the lowest-viewing nights of the week when MAGNUM started. So that’s a good lesson for me. It’s kind of out of our hands anyway. I’m just delighted to be on the air.”

TAKE 5
On continuing to do the occasional Jesse Stone TV movies for CBS in addition to BLUE BLOODS …
“What we’ve become, I’m grateful to say, is kind of a two-hour event,” says Selleck. “I hope people want to keep watching him because I love playing that guy enough to make sure I could do him even if I took this role.”