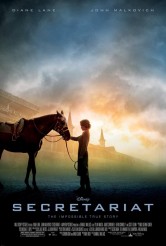 An occasionally exciting, but uneven film about the owner of an impressive racehorse

SECRETARIAT is about a horse called “Big Red” by those who knew him, who was one of the great equine athletes of all time. In 1973, Secretariat won the three races that together are the Triple Crown of American horse racing, setting a speed for the last one that has not yet been matched. It’s a story known to horse race fans and indeed to many people who aren’t into the sport but have heard the statistics.

William Nack, who covered Secretariat’s career back in the day, wrote a nonfiction book about the horse and screenwriter Mike Rich and director Randall Wallace have used this as a jumping-off point for their film. The results are mixed. On the one hand, Wallace stages some races that are seductively thrilling, even to non-fans of the sport. On the other hand, the attempt to blend Secretariat’s athleticism with lionizing his Penny Chenery (Diane Lane) while trying to turn the whole thing into a kind woman-and-her-horse love story doesn’t entirely pan out, not least because the facts don’t support what the filmmakers want us to feel.

The film opens with a read-aloud Biblical scripture about the fearlessness of horses, while we are shown horses waiting at the starting gate, their eyes bloodshot and rolling. Once we realize that the footage is meant to illustrate rather than contradict the Bible verses – which it seems to do, as the horses look terrified – we’re set to experience further disconnects between the filmmakers’ intentions and their results.

Penny Chenery is a reasonably conventional, conservative, wealthy Sixties Denver housewife living in Denver with her lawyer husband Jack Tweedy (Dylan Walsh) and their four children. When Penny’s mother dies, Penny returns to the horse ranch where she grew up to see her ailing father (Scott Glenn), one of the most respected horse breeders of his day.

Penny takes over the running of the farm, which is not doing well financially. When Penny’s father and his lawyer die, one after the other, it would seem time to sell, but Penny wants to preserve her father’s legacy, particularly when a colt called Big Red in the barn – his racing name will be Secretariat – shows exceptional promise on the track. Penny secures the services of prickly trainer Lucien Laurin (John Malkovich) to get Big Red ready for his races. To save her farm, Penny gets an enormous stud fee for Big Red’s future services, but this is contingent on him winning the Triple Crown, three races, one after the other. Meanwhile, Penny is dealing with a husband, who feels she’s putting racing before family and a racing establishment scornful of a woman entering its most exalted ranks.

The filmmakers manage to generate considerable suspense in telling the tale, especially given that we know the outcome (Secretariat wouldn’t be famous if he hadn’t prevailed). The actual races are photographed and edited for maximum impact, so that we feel ourselves in the midst of the speeding horses and can’t help but be awed by the animals’ athleticism.

Lane makes a swell, steely patrician, forceful when she needs to be yet open to hurt and loneliness. Lauren is written as a little more eccentric than is credible within the mood set here, but Malkovich is entertaining and has moments of unexpected gentleness. Margo Martindale, as Penny’s right-hand woman, and Nelsan Ellis (Lafayette on TRUE BLOOD), as Big Red’s groom, are both superb, filling up the movie’s margins with color and warmth.

However, SECRETARIAT has a certain disconnect. We can respect Penny for standing up for herself, but she’s not trying to break ground for anyone else, and she’s got too much money and social standing to ever be seriously oppressed or even seriously insulted. Despite the extent to which she (and the film) protest her financial difficulties, it seems pretty clear that she can go back to a comfortable life should this venture fail and the horses at the farm will simply go to different owners.

This leads to the movie’s other, bigger problem – not only the publicity but the filmmakers are trying to sell this as one of those classic Disney love stories between human and animal. Well, Penny is proud of Big Red and talks to him and feels close to him, but she’s also willing to risk his health and life on the track and the epilogue notes that he wound up on a different farm, while Penny went back to Colorado. This is a woman proud of a commodity, not someone who feels she is in the presence of an equal who is simply of a different species – and the latter is at the heart of all good boy-and-his-dog, girl-and-her-horse even man-and-his-car movies.

If you like horseracing, SECRETARIAT is breathtaking. If you want to see a movie about a woman who loves her horse, or who is literally (as opposed to figuratively) risking everything for either a conviction or for any kind of altruistic goal, this isn’t it.