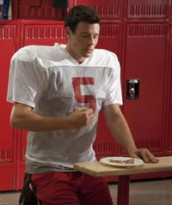 When you’re going to take on religion, take it on head first and do something powerful with it or humorous. Don’t do something like GLEE does with “Grilled Cheesus” a rather sucky episode that has its intentions in the right place, but yet again doesn’t know how to deliver the goods.

Falling somewhere between sappy (Kurt’s dad has a brain aneurysm and is in critical condition in the hospital) and silly (Finn prays to the image of Jesus that ends up burned into the toast of his grilled cheese) it’s a weird blend of spiritualism and comedy that never quite comes together.

Kudos to the show for showing how vacuous and selfish Finn (Cory Monteith) is, but the show doesn’t do Kurt (Chris Colfer) any favors either as his anger towards religion, in the face of his dad potentially dying, comes off really harsh and depressing.

The song choices are also all over the map, with only “One of Us” truly standing out as the episode closer.

At least GLEE is trying something new now and again, but without engaging subplots to keep the show moving, this season is starting to feel like lame excuses for the stars to break into song, rather than songs that move the story forward.