Home » Movie Review: MADE IN DAGENHAM 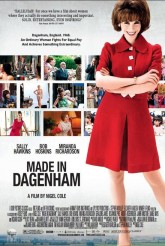 Movie Review: MADE IN DAGENHAM

Sally Hawkins, Bob Hoskins and Miranda Richardson star in a likable and timely if traditional fact-based film about a groundbreaking equal-pay-for-equal-work battle

With all of the arguments today about labor unions, MADE IN DAGENHAM is certainly timely. The film, directed by Nigel Close and written by William Ivory, concerns the real strike that occurred in 1968 at the Ford auto factory in Dagenham, England, when a one-day walkout by the plant’s 187 female workers over their designation as “unskilled” workers (and the commensurate lower wages, vs. the 50,000 skilled males then employed there) turned into a full-on strike for equal pay for equal work. 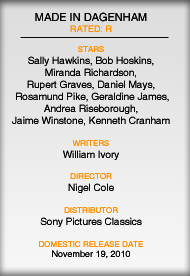 We can see the cause is just. Stitching car seats together is not something that can be done by just anyone. Further, it’s no easy task, with the women laboring in a room so hot they have to strip down to their underclothes to bear it (men avert their eyes when entering the room), while having to dodge major ceiling leaks when it rains.

The unlikely leader of the strike is Rita (Sally Hawkins), described in the press notes as an amalgam of several real people, married to fellow factory worker Eddie (Daniel Mays) and mother of two. Rita is brought along simply for balance in a meeting with the Ford reps, but finds herself speaking up when her shop steward Connie (Geraldine James) won’t and the head of their union local (Kenneth Cranham) seems to be essentially siding with the factory. To the astonishment of everyone, including the strikers themselves, the work stoppage finally shuts down the factory – the men can’t keep working on cars that have no seats – testing the support of everyone, including Eddie.

There’s a standout scene between Rita and Eddie where he attempts to paint himself as a good guy by enumerating all the things he does for Rita – like never hitting her – and she quite rightly blows up at him. Elsewhere, Ivory’s script links the way women are treated in the larger world to the specific issues of the strike, but it feels at once a bit familiar and somewhat distant, as though the points needed to be included but didn’t sufficiently fire anyone’s imagination to illustrate them in new ways.

Even so, a lot of the DAGENHAM’s issues are both universal and timeless, especially regarding how much a majority will or won’t help a minority, even a minority with a lot in common with the majority, when the majority feels its own interests are at stake. It’s impressive that in this instance people did wind up pulling together rather than pulling each other apart.

Hawkins gives a charming, gutsy performance as the unassuming Rita, who is as surprised as everyone else is when her inner crusader emerges. Bob Hoskins as the women’s staunchest union ally is sweet, warm and supportive, just the sort of fellow you’d want on your side. James as the careworn Connie and Jaime Winstone as Sandra, a seat-sewer who has showbiz ambitions, are both impressive. Miranda Richardson has wit and bite as a government official who heartily sympathizes with women whose work is marginalized.

Despite being the only narrative film to address this particular incident, MADE IN DAGENHAM doesn’t feel like it is saying anything especially new about either workplace sexism or labor relations. However, it is well-acted, well thought-out and informative enough to be worth watching.