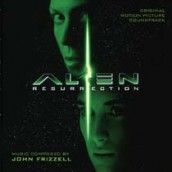 It's time to give this ALIEN its musical due

The release of Fox’s mega-ALIEN ANTHOLOGY collection on Blu-ray is a particularly good time to revisit the saga’s scores, which have now gotten virtually complete releases on CD and isolated DVD tracks.

While we’re still waiting on a full album release for Elliot Goldenthal’s wonderfully strange score to ALIEN 3, another major check has been added for what might be the most unsung score in the series with the release of John Frizzell’s music to ALIEN RESURRECTION, which hits from La La Land as a two-CD edition that collects the complete score, its alternate takes and the original 1997 soundtrack.

Done the same year as Frizzell’s other breakout action score for DANTE’S PEAK, ALIEN RESURRECTION remains a balls-out testament to the young composer’s exceptionally strong talent at combining a boldly thematic orchestra with the kind of bizarre electronic effects he’d conjured for the show VR.5– starting straight off here with a gurgling main title.

After paying nice tribute to Jerry Goldsmith’s original ALIEN theme, Frizzell goes off on his own intoxicatingly mysterious direction as a xenomorph plague breaks out on a space station, his music powerfully capturing the melancholy human vs. alien struggle going on inside a cloned Ripley. And with the jump-the-shark moment of a double-jawed victim digging into his skull, Frizzell’s score goes suitably insane, but with far better purpose.

His RESURRECTION remains some most hellaciously exciting music heard in a sci-fi horror hybrid, with the frenzied players almost blowing their guts through their brass instruments in unceasing cliffhanging escapes that skirt the edge of anarchy. With the full, creative scope of the 90-minute score now revealed Frizzell’s knowingly over-the-top mania makes RESURRECTION sound like a steroid mash-up of Goldsmith’s chilling tension and James Horner’s thrills, as funneled through the enthusiasm of a composer giving it his all for a big franchise break.

You can purchase the ALIEN: RESURRECTION (3,500) soundtrack HERE

Movie Review: HARRY POTTER AND THE DEATHLY HALLOWS PT. 1
CD Review: A CERTAIN SMILE soundtrack
TV Review: ONCE UPON A TIME - Season 1 - "7:15 A.M."
WHAT WE DO IN THE SHADOWS: Actor Matt Berry on Season 2 - Exclusive In...