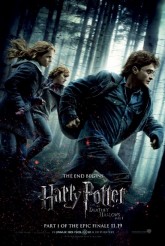 Somewhat uneven, but eventually glorious adaptation of the first part of the last HARRY POTTER novel 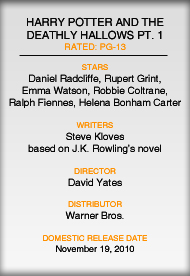 HARRY POTTER AND THE DEATHLY HALLOWS PT. 1 gets off to a bit of a wobbly start, as even those who are familiar with J.K. Rowling’s series of novels and the previous HARRY POTTER films (which is to say, the majority of the audience) may need a little while to remember just where we’re at in the story.

Steve Kloves’ screenplay assumes we remember the salient facts from the last film, HARRY POTTER AND THE HALF-BLOOD PRINCE, where the ailing Hogwarts headmaster Albus Dumbledore (Michael Gambon) was killed by Dark Arts teacher Professor Snape (Alan Rickman), to the general horror of everyone.

DEATHLY HALLOWS PT. 1 begins with Harry (Daniel Radcliffe) and his friend Hermione (Emma Watson) both having to leave their Muggle (non-magical) families, with Hermione going so far as to put an amnesia spell on her parents so that they won’t remember having a daughter – it’s the only way to keep them safe from the rising forces of the Dark Lord Voldemort (Ralph Fiennes), the powerful and evil wizard who wants to kill Harry, take over the magical world and, it seems, subjugate the mundane one. After each receiving a surprise bequest from Dumbledore’s will, Harry, Hermione and Ron Weasley (Rupert Grint) are soon hard at work trying to find and destroy the rest of Voldemort’s horcruxes – objects that contain the split pieces of his soul – while hiding from the Dark Lord’s servants.

There was a lot of chatter back when it was announced that the adaptation of DEATHLY HALLOWS would be made as two separate features. Doubtless there are financial considerations, but from the evidence here, this was the right decision to avoid making a single film that would have to proceed at the speed of a bolt shooting from a wand in order to include all the salient story elements.

As it is, DEATHLY HALLOWS PT. 1 bounds around from Harry and Hermione leaving home to a funny sequence of multiple Harrys to a fearsome midair battle to a wedding to more havoc in what feels like under fifteen minutes. We’re given so much to process that none of it really has time to sink in until Kloves’ screenplay and David Yates’ direction slow down and give us time to not only consider what we’re being told, but to see our main characters interact. A lot of consideration, tension and tenderness has been built into the relationship  between the core dynamics of the three main characters. So the pairings of Harry and Hermione, Hermione and Ron, and Ron and Harry, all get time to breathe in a welcome manner.

True, like the book, the movie has a section where it does feel like they’re hiding out in the woods for a very long time, but there are also splendid flourishes, like the shadow puppet animation of the tale of the Three Brothers, which explains what the Deathly Hallows are.

The plentiful action sequences are very intense and often violent. Parents of small children should be warned that DEATHLY HALLOWS is not made for very young viewers, unless these are children already used to at least 1930s-style horror. (It’s also worth noting that a sequence of jealous fantasy, while nothing beyond bare shoulders is seen, is somewhat more provocative than what was suggested in the book.) 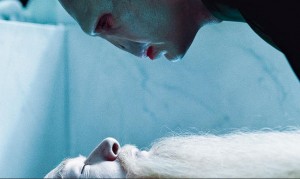 Radcliffe is excellent as Harry, deeply troubled yet capable of compassion. Watson continues to convince us that Hermione has both brains and heart and Grint, who gets a lot of the drama this go-round, is moving as Ron grapples with some huge jealousy issues. Among the adult cast, Fiennes is regally frightening as Voldemort, Helena Bonham Carter is back as the full-force bonkers Bellatrix Lestrange and Imelda Staunton reprises her deliciously vile Delores Umbridge, the horrible former Hogwarts teacher, now a department head at the Ministry of Magic.

Director Yates has bathed the film in wintry hues, making it appear almost desaturated at times, to go with the mood of the wizarding world in the story. This makes for many scenes of stark beauty so when there is color, it has a powerful effect. The sense here is less fairytale than folklore, of old myths that change forms but remain recognizable as they pass from culture to culture.

One of the chief pleasures of HARRY POTTER AND THE DEATHLY HALLOWS PT. 1 is that it encompasses this sense of the universal and yet remains touchingly specific with Harry and his friends, who we’ve come to know so well over the years.