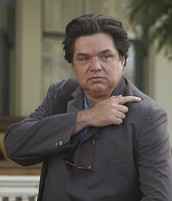 © 2010 Showtime
Oliver Platt in THE BIG C - Season One
Interviews

In Showtime’s new dramedy THE BIG C (which just wrapped up its first season this week), erstwhile suburban housewife Cathy Jamison, played by Laura Linney, turns her life upside-down when she is given a diagnosis of terminal cancer. She doesn’t immediately tell her husband Paul, who is bewildered by Cathy’s sudden (to him) change in behavior.

Platt, who played White House Counsel Oliver Babish on THE WEST WING from 2001-2005, with a massive resume of starring and costarring roles in film, TV and stage, took some time to talk about playing Paul and a few other noteworthy recent gigs.

AX: Do you try to alternate between film and television, or do you take it on a project by project basis?

OLIVER PLATT: Yes. It’s the best material that I’m offered. [Most people] don’t need to be told that so much of the good material these days is being produced on television, especially on cable television.

AX: Do you completely go by the quality of the material in choosing roles, or are you also going to change it up a bit from whatever you’ve just done?

PLATT: Well, actually both. I’m looking for something that is different than what I just did, because if I get bored – I mean, if I’m not interested, I can’t remotely expect you to be [while] watching me, you know what I mean?

AX: You’ve been cast a lot as sort of a not completely grown-up guy. Do you seek those roles because they’re fun, or do you think somebody sees something in you that causes them to cast you as those characters?

PLATT: I think that I’m extremely fortunate to get [those roles]. Characters who have inherent challenges are often the ones who are the most interesting to play. What’s more boring than a perfectly put-together person who’s well-adjusted and has no blind spots in the way he deals with his life?

AX: In THE BIG C, it seems like Paul wasn’t that bad a husband, considering the depth of his wife’s exasperation with him.

PLATT: I don’t think he is and I think he got blind-sided by her behavior. Because remember, he has no idea what’s going on. I don’t find out until quite late in the first season that my wife is sick, and she’s treating me pretty badly. And the thing is, she has superficial reasons to kick me out of the house, but I know somewhere that I’m not getting all the information. And then there are some transgressions that I have to leave you to discover in your viewing of the show. What an interesting thing again – to put me in a hole, to have it be a bad marriage that this diagnosis falls upon, you know what I mean? That’s really interesting.

AX: Would you say it’s a bad marriage?

PLATT: Thank you for asking me to qualify that. It’s not a bad marriage, I don’t believe it’s a bad marriage, but it’s a long marriage. It’s a marriage that’s in its eighteenth or nineteenth year, and everything gets completely turned around. A lot of marriages don’t survive these kinds of diagnoses, but one thing I know for certain is this guy really loves this woman and is maybe taking her attention for granted a little bit. I don’t think that they have a terribly examined marriage, you know what I mean? They’ve never been to couples therapy before that scene, I’m quite sure. The marriage is really turned on its head in a really fascinating way. Again, what’s so interesting about playing the character – he doesn’t know why this all happened until quite late in the season. 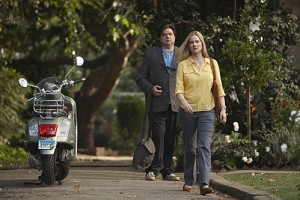 AX: Did you do any research into couples who are dealing with this situation?

PLATT: I haven’t had to, because I have lived in the dark. First of all, sad to tell you, I have a lot of research that’s right in front of me in my life. I know couples who have not survived – physically not survived. But in terms of actually having to do that sort of research, yes, I have it. Again, I find out very late in the season about the diagnosis.

AX: You played George Steinbrenner in the miniseries THE BRONX IS BURNING. Can you talk about your reaction to his passing?

PLATT: The honest answer to that question, I don’t consider myself to comment on this. I’m just an actor who played him on television – and I’m flattered by the question, but my own particular journey with Mr. Steinbrenner was, as a Red Sox fan, it kind of was my duty to despise him, and coming through the process of learning about him to respect him. A lot more than I wanted to, you know what I mean? I live in New York, and you wouldn’t believe the outpouring [of emotion after Steinbrenner’s death].

AX: Do you have an interest in the technical side of filmmaking? You were in 2012, which looked like it was very technically complicated between all the practical effects and all the visual effects.

PLATT: I love those kinds of movies, it’s really fun to be in them, but as far as working on the other side of the camera, if I [were to direct a film], it wouldn’t be that kind of movie, I would think. That’s a whole special skill.

AX: Do you like acting in big special effects films because it’s a whole different experience than the character-intense work you often do, to change things up for yourself?

PLATT: Yeah. I like to be in them because they’re so much fun to watch.

AX: You were Porthos in THE THREE MUSKETEERS a little while back – do you want to do any more action roles?

PLATT: Oh, sure. Again, if it’s a good script, if it’s a good action movie, if there’s something in there [for an actor]. There was actually something terribly interesting to me about 2012, this whole idea that the government knew that the world was going to end, and who do you save, and the really interesting moral question there. It was very terrifying and cynical and yet really compelling. So again, I’m not one of those actors who has some sort of master plan, like I have to check all these boxes. I just know when I see it what’s going to interest me next.