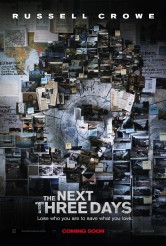 Movie Review: THE NEXT THREE DAYS

THE NEXT THREE DAYS is an English-language remake, apparently quite faithful, of the French thriller POUR ELLE. In the new version, scripted and directed by Paul Haggis (CRASH), Russell Crowe plays a husband so devoted that, when it looks like his wife is going to spend the rest of her life in prison, he decides to break her out and flee the country, even though he has no previous criminal expertise whatsoever. 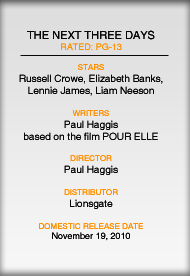 This last is the most prominent of the several plot engines propelling THE NEXT THREE DAYS. Most movies about something as large-scale as a prison breakout have at least one experienced veteran involved with the scheme, unless the film in question is broad comedy. Here, the mood is very much straight drama, but Crowe’s John Brennan is entirely on his own, apart from a little advice early on from a pro (Liam Neeson in a strong cameo).

John’s wife Lara (Elizabeth Banks) has spent six years in jail for a murder he’s certain she didn’t commit. After Lara’s last appeal fails and she attempts suicide, John decides he’s got to go outside the law. This decision coincides with the news that Lara is going to be transferred to another prison in three days, giving John the title timeframe to break her out (without warning her ahead of time) and then somehow getting both of them, plus their young son, very far away.

Since John discusses his plans with no one, what he winds up doing is usually a matter both intriguing and surprising to watch. He gets in more than a few very fraught situations as he tries to get the money and fake identification documents he and Lara will need. Crowe plays these scenes with a mixture of fear and determination that gives us both John’s inexperience at what he’s doing and his resolve to do it at any cost. We like the character and want him to succeed, if only so he won’t get killed or caught.

However, in the film’s efforts to be morally ambiguous, it alternately hedges its bets and gets somewhat distracting. It’s clear that we’re supposed to be worried about the state of John’s soul as he does some pretty dirty deeds in the service of his goal, but he never goes too far for us to seriously worry about this, at least by the standards of the thriller genre. Likewise, rather than being an added source of suspense, our not knowing until the end whether Lara is innocent or guilty, along with Lara’s increasing distance from John, just serves to make us wonder whether we want her free after all.

This isn’t an ethical question, but rather a visceral one. We’re given just enough time to think that John may be being played somehow, and rather than adding another level, the way it’s handled causes a split in focus that dilutes our involvement. There’s a sense that THE NEXT THREE DAYS wants to be more than it is, and by trying too hard on this front, it winds up being somewhat less than it could have been.

Even so, filmmaker Haggis creates a number of powerful sequences. Crowe is consistently watchable, Banks adroitly handles Lara’s charm, fragility and mercurial anger and Lennie James is engaging as the beleaguered law enforcer in charge of trying to figure out what the hell is happening here.