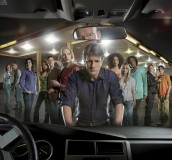 Tim Minear created the Fox series DRIVE, which followed the participants in a secret, cross-country, high-stakes road race. DRIVE aired four episodes in April 2007, then was canceled with several completed episodes unaired. In the concluding portion of our exclusive three-part interview, Minear talks about DRIVE and the differences between running a show solo and in collaboration with creative partners.

ASSIGNMENT X: As far as running your own show, working with Joss Whedon, working with Shawn Ryan – do you have a preference between being the person in charge, like you were on DRIVE, or working in collaboration? 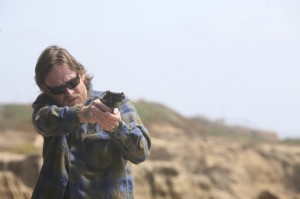 TIM MINEAR: Well, it all depends. The truth is, I pretty much ran TERRIERS with Shawn and Ted. I mean, Shawn was off working on his pilot and I was there for the day to day stuff. Ted hadn’t done television before, so we were really partners. It was a lot actually like when I was writing WONDERFALLS with Bryan Fuller, who of course had done television before, but he had never run a show before. So there’s something about collaborating when it’s with people that you feel are better at something than you are, so that you can learn things from them.

That’s a thing that Howard Gordon told me a long time ago when he was trying to get me to meet with Joss Whedon, before I ever had watched BUFFY, before I had ever really paid a lot of attention to what Joss was doing, Howard Gordon was saying, “You need to be working with Joss Whedon. You always want to work for and with people that you feel like, at least on some level, are smarter than you are.” And that’s advice I took to heart. So if tomorrow somebody offered me the opportunity to run my own show or to make another show with [TERRIERS creator] Ted Griffin, I would say, “Make another show with Ted Griffin.”

MINEAR: I think it’s mutual. I mean, let’s put it this way – who just now said to a reporter, “These people are smarter than me”? Who do you think’s really smarter? [laughs] There’s definitely always something that makes you feel like the person you’re choosing to partner with can bring is going to [allow you to do better work]. But like I said, Ted had never done this before. The first night, we had this big dinner around Christmas, before we started shooting TERRIERS. And after dinner, Ted pulled me aside. Here’s Ted Griffin, who’s written OCEAN’S ELEVEN and RAVENOUS, big Hollywood screenwriter, and by the way, he was my fear. My fear going into TERRIERS was, “I’m going into this with this movie writer, who probably thinks he’s better than all of us TV writers, who has created this show, and now they’re saying, ‘Tim, we want you to come in and run this show, and kind of teach Ted how to do it.’ Is he even going to listen to what I have to say?” He pulled me aside and said at that first dinner, “By the way, I know why you’re here. They asked for you to be here because I’ve never done this before, so I’m going to just listen to you.” And it was really a marriage made in Heaven for me. He was like the best partner I’ve ever had making a show with.

AX: You also had a wonderful cast. Donal Logue as Hank …

MINEAR: Oh, good Lord. Was he a revelation or what? You cannot overestimate what [actors Logue and Michael Raymond-James] brought. Yes, we wrote it, yes, Ted created those characters, but the truth of the matter is, they inhabited them – and here’s where the subtlety comes in. Donal wasn’t doing a big showy thing, he was just absolutely, one hundred percent real, every single choice he made. And it was all thought through. It was not him reading the sides, like some actors will do on a TV show, coming in and saying the lines. I’d never quite seen anything like it, to be honest with you. The truth is, we obviously didn’t have it all planned out, but we had some orange cones in our mind of, “At this point, Katie will sleep with her professor.” Even before we got to those scenes, it was like, “Will she be sleeping with the professor and his wife? Will it be a threesome? Will her professor be a woman? Will she wake up having been Roofied?” These were all questions that weren’t answered until we got to that moment.

AX: Well, if the professor were a woman, you probably wouldn’t have had the paternity test subplot …

MINEAR: Absolutely. Every choice you make has ramifications. And for instance, if we had had her been ambiguously been date-raped, I think that would have really hurt her character.

AX: Because if she were raped, Katie wouldn’t be making the choice to have sex outside of her relationship with Brit, and therefore the situation wouldn’t say as much about her character?

MINEAR: Yeah, exactly. We sort of had these orange cones of narrative, where we wanted to go, set up for the thirteen episodes, but we kept it loose enough so that we were sort of doing the TV equivalent of playing jazz. We could riff and go where we felt like the thing wanted to go, but some choices were definitely made for production reasons. For instance, the flashback episode that I wrote was written specifically because we had gone over [schedule] on episodes and I had to write something that we could shoot in six days. So I came up with the idea really based on a production concern and that’s how that story happened. 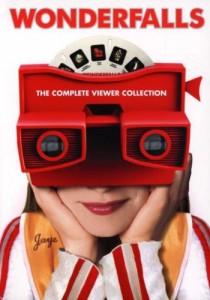 AX: Is this the episode that shows how Hank and Brit originally met?

MINEAR: Yes. Normally we shot episodes in seven days, which is short. On a network show, you shoot them in eight. We needed something we could shoot in six. If you look at the episode, a lot of those scenes all take place either in the police station or on one of the other standing sets, the apartment set and the house set. I think there’s one exterior of the karaoke parking lot, but other than that, I think we’re inside for the whole thing.

AX: Do you feel that you often get to metaphorically play jazz when you write, or are you more funneled into needing the scripts to hit a number of specific points?

AX: Is there ever a tipping point where you go, “In trying to please the network, this has now gotten so far from what I was trying to do and turned into something that I’m apathetic to that it’s no longer worth it,” or is it always, “I’m a professional, I’m being paid to write and my first obligation is to deliver a viable script”?

MINEAR: Those two ideas can actually live in the same universe. I would say that yes, I think I have now learned to be able to judge the point when it feels like it’s time to say, “You know what? You should probably get somebody else.” I haven’t had to do that since I learned that. I would say after the experience on DRIVE, I kind of knew that. Were I to come into a similar situation where it felt like I was just compromising so much, at some point, I would just have to bow out. But I haven’t been in a situation where I’ve had to do that – I might have done that on DOLLHOUSE, except that I was there for Joss and so I wasn’t going to quit. 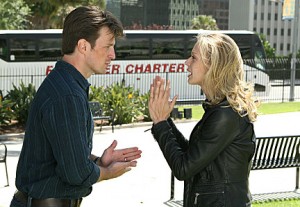 It took me probably eight months to a year to convince everybody to let me cast Nathan Fillion. And Nathan actually at the time had a holding deal with the studio and the network and he’s a friend of mine and he wanted to do it. So it’s like why are people dragging their feet on this decision, and why am I getting pitch-back from some of my creative partners, when this guy is so clearly a television star – how lucky would we be to get him? I just didn’t understand it. So I ended up going off and cutting together a three-minute reel of Nathan on my Mac, a lot of it from the movie SERENITY, and gave it to the new president of the network at the time, which was Peter Liguori, and literally twenty minutes later I got the call: “Cast him.” So I just felt like maybe they just weren’t familiar with this guy they had a deal for, like they didn’t know what he was capable of, or something. So that was just like one thing that would appear to be the most obvious call that shouldn’t take any kind of debate or dithering but did, for months. And so that’s just an example of what a mess [developing DRIVE] was.

AX:  Besides CHICAGO CODE with Shawn Ryan, are you working on anything else at present?

AX: Is there anything else you’d like to say about your work at this time?

MINEAR: Just that I look forward to doing another cable show, possibly with FX. Considering what happened [with TERRIERS], that creative partnership with that network was everything that I had hoped a partnership with a cable network would be. So like I said to E! Online, I have no regrets.