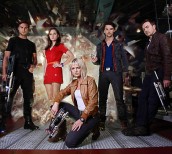 PRIMEVAL returns – almost beyond all reason – for a fourth series of adventures two years after its cancellation and miraculous resurrection via some joint funding (which will see it through at least a fifth series airing later in 2011). I’ve been following the show since its debut as an ITV DOCTOR WHO rival, and it’s one of those series that just seems to hang on despite not being all that good. It has a great premise, some decent characters (at least initially), a cute hook via the cheesy CGI dinosaurs and monsters that populate every episode, but it never manages to rise above mediocrity. And yet, here we are talking about its fourth series premiere.

As with most shows of its kind, PRIMEVAL surely has a dedicated cult following that will see it through all of its myriad fictional and production twists and turns, and dedication is what they need most. Like previous shaky sci-fi shows – I’m reminded of SLIDERS as one example – PRIMEVAL has endured annual shifts in tone, cast, production values and even overall plot structure as it’s struggled to stay alive. In this near-revival, it’s almost unrecognizable as the show that first kicked off with the charismatic Professor Nick Cutter (Douglas Henshall), dead since the beginning of Series 3.

Connor (Andrew-Lee Potts) and Abby (Hannah Spearritt) are still trapped in the Cretaceous era following the Series 3 cliffhanger, and Danny (Jason Flemyng) is nowhere to be seen (although he’ll return in a future episode). A year in the dinosaur-infested past has trained them to be survivors, but they’re losing their hope that a way home via an anomaly will ever appear. Meanwhile, back in the present Lester (Ben Miller) has been forced to share authority over the ARC project with Richard Branson-like entrepreneur Philip Burton (Alexander Siddig, looking more like his uncle Malcolm McDowell every year). If you don’t think Burton will prove to be more of a hindrance than a help, you haven’t ever watched a minute of episodic television.

Surprisingly for a season opener, nothing much happens for about half the episode. There are some big dinosaurs, people run around or quip relentlessly, there’s a ridiculous scene where a supposedly trained military officer goads a scientist into shooting him with a taser because they can’t think of any other way to show what big men they are, and suddenly Connor and Abby find a way home.

They shake off their year-long exile as if it was just a weekend trip to Scotland and immediately throw themselves into helping Captain Becker (Ben Mansfield) and the new ARC team of Matt Anderson (Ciaran McMenamin) and Jess Parker (Ruth Kearney) as they chase a spinosaurus that came back to the present with them.

New characters, you say? Oh yes, and not an ounce of character development for any of them. They’re just cardboard cutouts taking up space, and although Potts and Spearritt are still there to provide some emotional connection to the past, they were never exactly the most charismatic screen presences either. At least Miller’s wry Lester is still around to ground the show in something resembling reality. As for last season’s regular Laila Rouass as Egyptologist Sarah Page, her character is written off as dead, apparently killed in an off-camera attempt to rescue Connor and Abby. You have to watch some “prequel” episodes online to get any additional (and still very sketchy) information and the barest hint of emotional resonance from the surviving characters. There had to be a better way.

There’s also a weird shift in the approach to violence this season as the ARC team adopt EMD weapons (think of them as big tasers) rather than good old-fashioned guns, because apparently we wouldn’t want the kiddies at home to think we’d shoot and kill enormous monsters from other time zones hell-bent on chewing their flesh when we could just be real nice to them and knock them out instead.

After the requisite action sequence with the Torchwood – sorry, ARC – SUVs trundling around strangely underpopulated streets and an arena-based showdown with the spinosaurus lacking in any suspense or tension whatsoever, we’re hit with the predictable mysterious twist ending that always shows up to make you think there might be a reason to watch the rest of the series. Matt meets up with creepy Gideon (Anton Lesser) as creepy music plays and a creepy new story arc is introduced.

I may not be enthralled by this series, but I somehow keep hoping it will do better, and this episode – not only an amazing return for a nearly dead show but a jumping-on point that could ensnare a whole new group of viewers – does nothing with the opportunity and instead offers a boring, by-the-numbers time-filler. That’s PRIMEVAL in a nutshell, actually, so…good job?