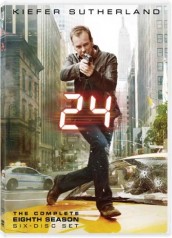 As the clock ran out for Jack Bauer, it was a yo-yo of a season from good, to so-so, to brilliant and the DVD is chock-full of cool new extras

Day Eight proved to be the final day for 24 the TV series as the real-time series (chronicling a major U.S. crisis in a 24-hour period) waved goodbye in the same aggressive manner in which it began.

Kiefer Sutherland toplined the series as former Counter Terrorist Unit (CTU) agent Jack Bauer. Over the course of eight seasons he lost so many of his loved ones, so much of his mind and soul and of course his privacy that he ended up a man without a country – a man without a home.

However, when he was on a mission – he was a one-man task force and saved the U.S. so many times from total annihilation, we owe him a debt of thanks (even if he did let those pesky terrorists unleash a nuclear bomb on most of the Santa Clarita Valley).

The anchor to the show was Jack, and for most of the series’ run his girl Friday was computer whiz Chloe O’Brien (Mary Lynn Rajskub).

It’s the two of them that weathered numerous cast changes and shake-ups, but these changes were never done because of contract disputes or personality conflicts with actors – the changes were always about keeping Jack a fish-out-of-water in whatever situation he was in and usually a situation he couldn’t control (and where no one would listen to him).

Season Eight begins with him at peace. After almost dying in Season 7, he’s now playing grandfather to his daughter’s young child and he’s loving it. “Peace” and “Jack Bauer” don’t go together though, and before long he’s dragged headfirst into a new conspiracy where he has to fight for his life – again!

Peace talks are happening between President Taylor (Cherry Jones), the Russians and a fictitious Middle Eastern country, but to torpedo these talks, an assassination attempt has been planned on the leader (Anil Kapoor) of the Middle East country.

Jack, of course, tries to save the day.

The season kicks off with a pretty solid start, but then hits its usual mid-season lull a little too early and struggled to fully find its way out of it especially with the subplot of Renee Walker (Annie Wersching) infiltrating the Russians taking way too long. There was also the annoying shenanigans of CTU analyst (Katee Sackhoff) that drove fans (and us) a little bonkers throughout the season until she finally stopped her innocent act and started becoming a bad ass.

Once it was clear Season Eight would be the last year of the show, 24 miraculously kicked into high gear. Jack experienced another great tragedy which sent him off the deep end and into a hyper-vigilante version of himself. The sheer joy and unpredictable nature of the latter half is what will keep you glued to the screen now that you can watch the series in its entirety.

As for the ending of the series, the show almost leads you to believe one thing, and then tricks you and ends the show with a very fitting goodbye.

Watching Chloe’s transformation this season from being at the low-end of the totem pole at CTU, to taking control, was awesome – especially when it pitted her (unfairly I suppose) against Jack. Freddie Prinze Jr. joined the show this season as a young CTU agent – and more than held his own against Bauer, once the silly subplot with Sackhoff was finally over. He has a strong presence, and his appearance on this show proved he would be well-suited for an action series of his own (as long as it’s not something too vanilla like a C.S.I. or NCIS spin-off).

The special features on this six-disc set include select extended episodes, deleted scenes (though they’re not very revealing) and featurettes on creating a virtual New York City while shooting in Los Angeles and a look at the new “CTU.”

The one disappointment is the set does not include the bonus scene of Chloe being interrogated after the events of Season Eight. In order to own that nugget, you have to purchase 24: THE COMPLETE SERIES.

Overall, 24 – SEASON EIGHT is a reminder that there will never be another show quite as engaging, button-pushing and innovative as 24. It was lightening in a bottle – a show that shouldn’t have lasted more than one season, but thrived against all odds to provide a yearly 24-episode dose of high-octane action, intrigue and drama.

Season Eight wasn’t the perfect season, but it was a great send-off to an old friend. Jack Bauer will be missed and I can’t wait for his big screen career to reboot the franchise all over again.