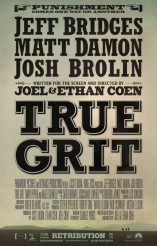 Sometimes more of a good thing is just great, which is the case with the Coen Brothers’ (Ethan & Joel) remake of TRUE GRIT. The 1969 original, based on Charles Portis’ novel, won an Oscar for John Wayne as Rooster Cogburn, a one-eyed, alcoholic U.S. marshal who reluctantly takes up the quest of tracking down the man who murdered the father of fourteen-year-old Mattie Ross (Kim Darby in that version) – with Mattie doggedly accompanying him.

The new edition has Jeff Bridges as Reuben “Rooster” Cogburn, in a performance as far from Dude-hood as can be imagined. Cogburn is growly, combative, irritable, and at first glance doesn’t appear to have so much as an altruistic whisker on his person. This doesn’t bother Mattie, played by Hailee Steinfeld here – the quality she values most in a marshal is meanness.

Mattie is driven by an all-consuming passion to have Tom Chaney (Josh Brolin) arrested, tried and hanged for the cold-blooded murder of her father, Chaney’s employer. To this end, Mattie is willing (perhaps even eager) to bribe, threaten and endure all manner of hardship. Cogburn at first doesn’t believe her money is real. When he gets his pay, he then can’t remotely get his mind around the idea of entering Indian territory with a fourteen-year-old girl in tow. Meanwhile, another U.S. marshal, LaBoeuf (Matt Damon), means to take Chaney back to Texas, where he’s wanted for killing a politician. 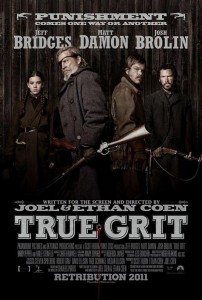 Between the contraction-free, Victorian-style dialogue and the cinematography by Roger Deakins, there is an uncommon intensity to TRUE GRIT. Whether or not people of its time and place actually talked that way, with little flourishes that give the words almost Shakespearean flavor at time, the filmmakers convince us of the reality of the world we see here. We can just about feel the cold and the dust, along with the dread of tracking unknown foes in true darkness.

Even more potent is the sense that each of the characters has a layered life, both inward and outward. Whether or not we agree, we get a strong sense of how the philosophies of Mattie, Cogburn, LaBoeuf and even Chaney affect their actions and their lives. We want to watch them because we believe in their determination and want to see where it will lead them, and because the Coen Brothers make us feel like these people and their environment are of a tough piece, alternatively challenging and injuring and helping each other, but always fitting together cohesively.

Bridges makes Cogburn gruff, ornery, weary and wounded, formidable and yet weak in telling places. When strong emotion comes to the man, the filmmakers let Bridges show us in his performance and in Cogburn’s actions, rather than in any dialogue. Steinfeld has great strength and composure along with youthful wonder as the indomitable Mattie. Damon makes LaBoeuf cocky without taking him over the top and Brolin as Chaney gives us a man whose pathetic lack of backbone makes him all the more dangerous. Barry Pepper, who is having quite a year between this and CASINO JACK, stands out as a criminal with a semblance of a moral code.

TRUE GRIT has both the unforgiving harshness of wilderness inhabited by likewise hard men and the wild joy of pounding action that shows off both characters and gunplay. It is a true Western, and a fine one.