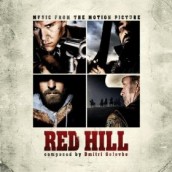 Another cool modern western score hits from Down Under

It’s ironic that two of the coolest wild west scores to arrive in years both hail from Down Under, as Dmitri Golovko’s RED HILL joins Nick Cave and Warren Ellis’ THE PROPOSITION as prime examples of how to give an old musical warhorse a shot of ferocious outlaw energy. But where PROPOSITION’s nerve-jangling percussion brought modern experimentalism to a blood-soaked period piece, RED HILL shoots its raw, old-school acoustic sound into a contemporary western- in this case playing the last stand outback sheriff standing against a recently released villain out for some biblical payback.

There’s very little that’s Aussie here in Golovsko’s guitar-centric approach, which is joined by a simmering harmonica vibe, sinister, clopping percussion and even pianos to create an eerily dusty atmosphere. All growling roads lead to a full-on Spaghetti showdown with fateful trumpets, gongs and wailing choruses paying tribute to the timeless feel of duster coat bad guys and noble lawmen meeting for the big gundown- a sound that fully brings his vibrant homage score ripping into the 21st century.

You can purchase the soundtrack – HERE